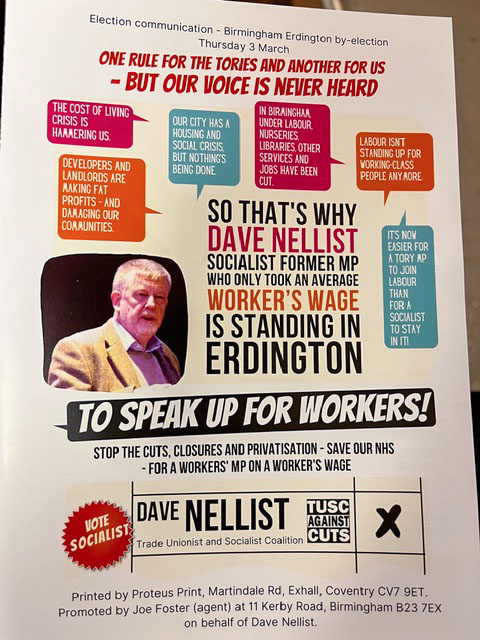 In attendance with Nellist was former Derby North Labour MP Chris Williamson, who opened proceedings with a long and passionate speech.

Williamson displayed his frustrations at the current political system and identified a large number shortcomings by the Labour run Birmingham City Council.

He branded the current state of affairs in Parliament as “neo-liberalism” and reiterated points made previously by Nellist – including the two main political parties being “blue Tories” and “red Tories”, and Labour letting working class people down.

Williamson added: “We have a cost of living crisis. We saw the Tories break their solemn pledge that pensions would increase in line with wage rises and inflation. The Labour Party just sat on their hands in response.”

The atmosphere at the Highcroft Centre was positive, with applause erupting during multiple parts of Williamson’s address and most seats taken up by keen party members and constituents.

The speech strayed at times from Erdington focused issues, pointing out national flaws/scandals, but gradually came back to focus on issues local constituents were more familiar with. 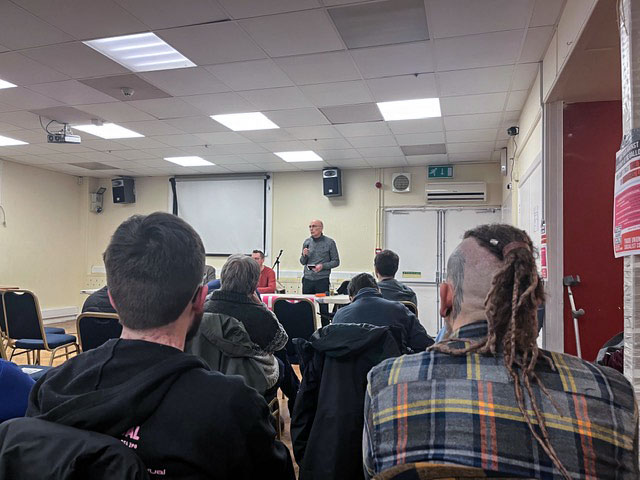 Williamson said: “the Labour Party is broken in terms of the Westminster situation, but it is also broken on a local level?

“What is the Local Authority doing about the housing crisis? Or rough sleepers? Or people struggling and waiting for years in order to secure Council housing.”

Held at the Highcroft Community Centre in Stockland Green, Dave Nellist’s official launch rally was in the heart of an area greatly affected by HMO and exempt accommodation, something which was brought up regularly.

Dave Nellist, who had been delayed in getting to the venue, was eventually introduced by Ted Woodley, an RMT union representative.

Nellist began by stating: “The government are spending over £100 billion on HS2 to get people to and from Birmingham and London 15 minutes quicker, and it’s taken me over 90 minutes to get here from Coventry.” 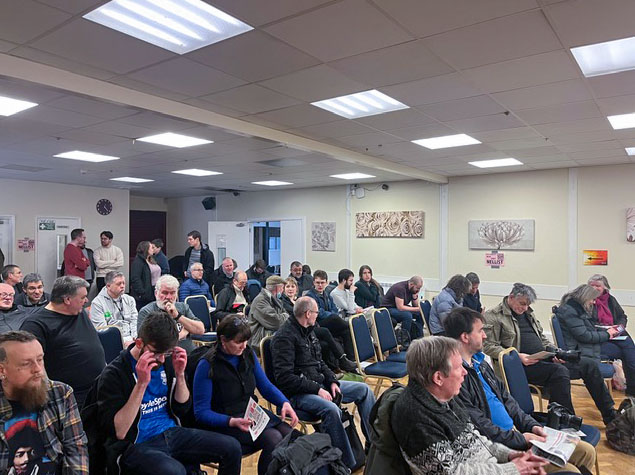 Following a short introduction, detailing his political past as Labour’s Coventry South East MP and Coventry City councillor for both the TUSC and Socialist Alliance, he added: “I think I am the best qualified and most experienced candidate in this election, by far.”

He mentioned the recent campaign to save Short Heath Playing Fields, having met with campaigners earlier in the week – sympathising and describing the same situation he faced as a Coventry Councillor, and the solution that worked at Charterhouse Fields.

Mr Nellist also included in his address the recent loss of jobs at the GKN Chester Road factory, something which Jack Dromey passionately fought to stop right up until his recent death.

Nellist told the crowd: “the loss of jobs and the offshoring of peoples livelihoods could have been stopped.

“The Tories could have nationalised GKN, and kept the factory and the jobs in this constituency. 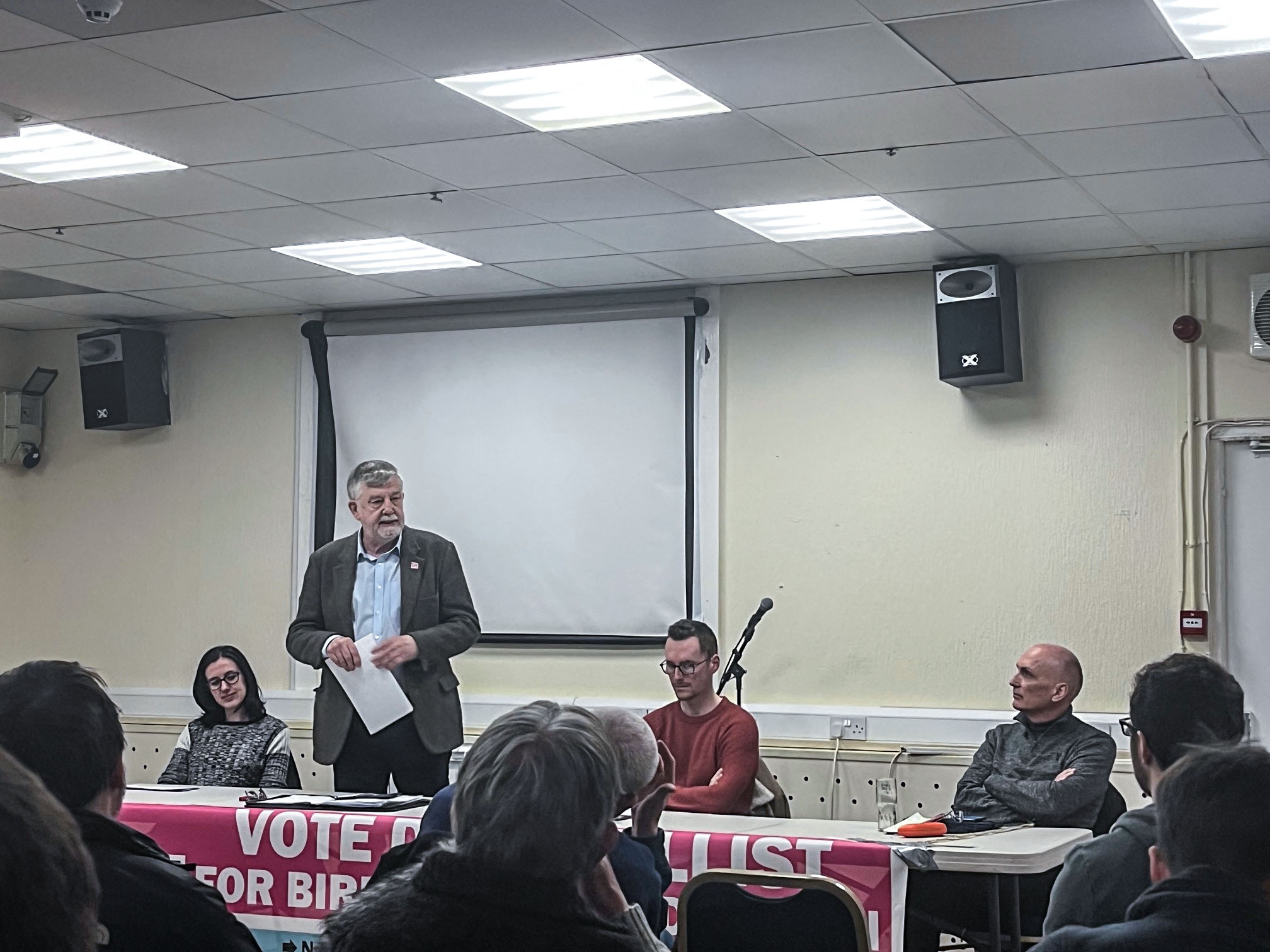 “I will not be a manager like my main two opponents in this election, acting as different wings of the establishment, but a shop steward who acts on behalf of working people and their families.”

He reiterated how MPs are overpaid; Nellist well known for giving up a large chunk of his salary whilst representing Coventry South East in the House.

He added: “when a heating bill comes through your door in April and it’s £60 a month more than what you were paying before, it feels a lot different for ordinary working families than it will for an MP on £82,000 a year. MPs are insulated from modern day problems.”

The response from the crowd was agreeable, with many of Nellist’s points being answered by applause.

The floor was then opened up for people to add their comments and questions, which included the problems from ill managed HMOs and exempt housing, rogue landlords, and how the Commonwealth Games is a “vanity project” taking money away from addressing the homelessness crisis – with significant negativity towards the current Labour run City Council. 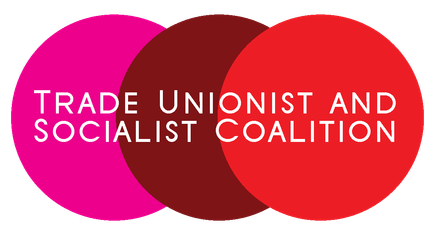 In contrast to other campaign launches Erdington Local has attended, there was more structure and organisation to Dave Nellist’s rally, including the use of a microphone, seating being arranged, and an opportunity for local residents to put forward comments, questions, and concerns.

As the 3 March polling day approaches, Dave Nellist’s campaign could gather yet more momentum and attract left leaning Labour voters – making a dent in other campaigns and holding a serious question mark over what some consider a ‘safe seat.’

With a total of twelve candidates contesting the Birmingham Erdington seat and just under three weeks to go until poling day, this by-election is by no means a certainty at this stage.

For more on Dave Nellist and his campaign to beomce the next Erdington MP visit www.nellistforerdington.com

Dave Nellist came into the Erdington Local newsroom earlier in the week, to talk about his campaign and introduce himself to us – the constituency newspaper. It was not a planned interview, although I did take the opportunity to press record and get some of Mr Nellist’s thoughts on record. 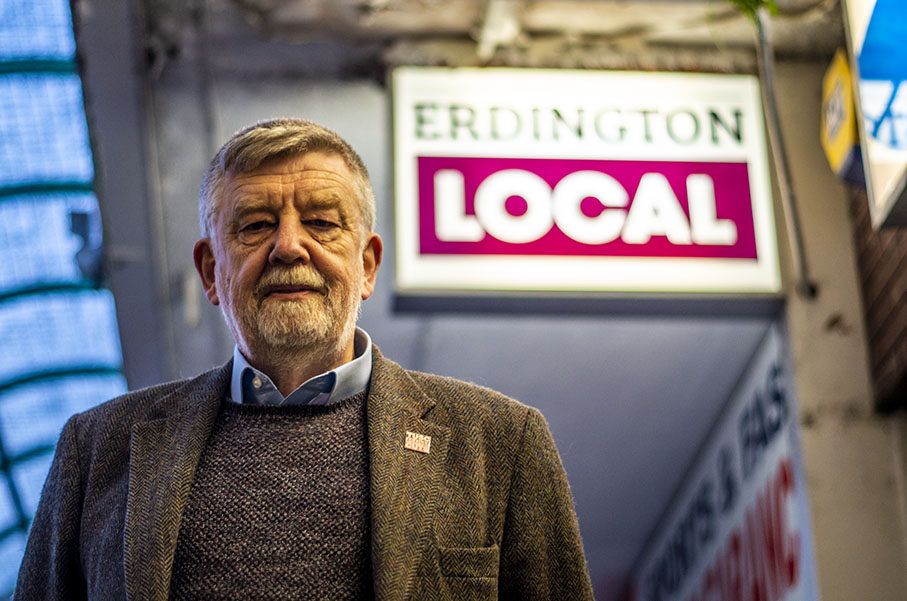 As anyone who knows me personally can attest, I am fiercely apolitical – and Erdington Local has no bias to one party or ideology. Never has; never will. We welcomed Mr Nellist, quite simply, because he asked to come and see us.

The conversation was fascinating, and lasted for well over an hour, resulting in 12 pages of transcript. This did, sadly, make writing it up a somewhat herculean endeavour – even aided by the wonder of modern technology.

Below is a surmised account of some of our conversation, presented as a Q&A – akin to the format of engagement at Dave Nellist’s campaign launch rally.

Many people are increasingly concerned about rising energy prices and the general cost of living. If elected, how would you address this for people in Erdington?

“I think we’re heading into the worst cost of living crisis that we’ve seen probably for 20 or 25 years. And we’ve got a widening gap between the very rich within society and the rest. And in parallel a narrower gap between the main big parties.

“Without trade union based socialist campaign in the (Birmingham Erdington) by-election, it will just be a discussion about how working people should bear the brunt of austerity, not whether they should.

“Our public services should be publicly owned, publicly financed, and better publicly controlled than we’ve had nationalised industries in the past – cutting people’s gas and electricity bills, whilst using a good chunk of those profits to invest more rapidly in renewables and other forms of clean energy.” 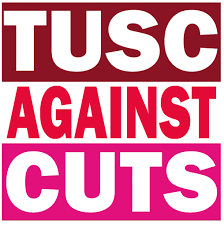 You famously gave up the majority of your MP salary whilst representing Coventry South East, would you do the same for Erdington?

“I was 14 years a City Councillor in Coventry, whilst working for the Citizens Advice Bureau (CAB) all that time as a debt and welfare right specialist – representing hundreds of people over social security tribunals, stopping evictions, stopping bankruptcies, and supporting people over disability rights and incapacity benefits.

“And whilst I was a City Counsellor I received a £10,000 pound a year for allowances – I reduced my hours, so I wasn’t earning anything more than an average CAB worker whilst also in Council employment.

“I don’t think in my life I’ve earned more than £29,000 pounds, even though I’ve been in jobs that earn two or three times that salary in today’s money.”

Erdington’s last MP, Jack Dromey, came from a trade union background into politics. Are you hoping to gather similar momentum as TUSC candidate?

“I’m not going to pretend to claim I’m at the level Jack was (in the union) – Jack was, you know, a leader of our union, Unite. But I’ve been a member of Unite and its predecessors for 48 years, always as an active member.

“For example, I’ve spent most of the last three weeks at six, seven o’clock in the morning on picket lines in Coventry – supporting the bin workers strike that we’ve got going on at the moment.”

Many of our readers want to see a local candidate become the next MP. What about concern’s that you don’t live in Erdington?

“So, firstly, and it’s a bit trite, but I’m from the next but one constituency – Coventry North West. It might be 18 miles away but I’m only 25minutes away by car, it’s probably easy for me to get here (Erdington) than somebody from South Birmingham.

“But if elected, I would open an Erdington office with immediate daytime access for people to come in with problems or what have you.”

You have talked about getting socialist candidates in local and general elections, to give an alternative to the “red Tories” and “blue Tories” in the leading political parties. Are you, as the TUSC, trying to do the job the Labour Party was originally set up to do?

“Yes. Simply, yes. But I would also say we also want to, hopefully, re-enthuse almost half the population of Erdington that can’t see the difference between anything that’s an offer at the last general election and didn’t vote.

“Okay, how do you offer something different in a succinct term that people can grab hold of? 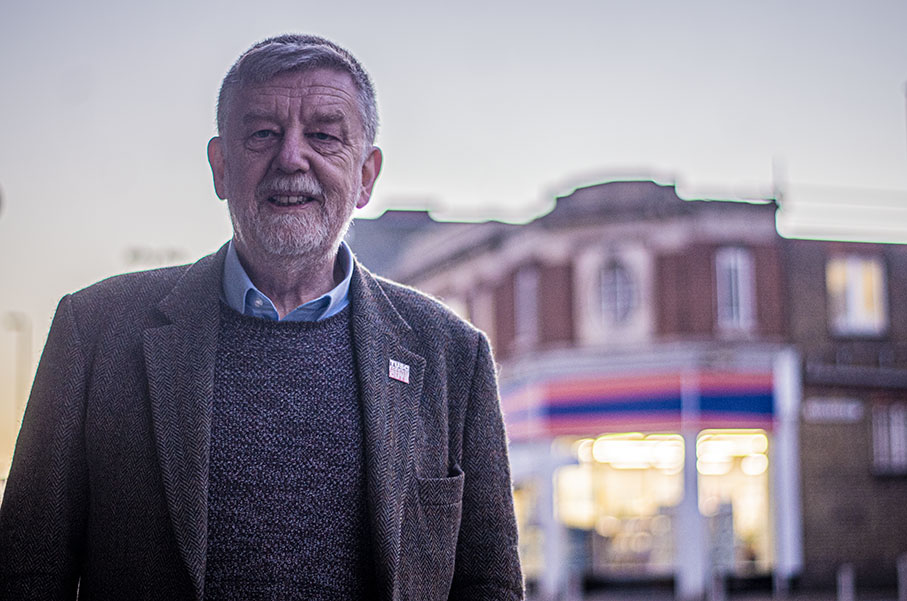 “We’re fighting for a £15-pound an hour minimum wage. We want to see a 50% rise in the value of pensions and of benefits. We want to see more Council homes, and whilst we have private landlords, we want to see them regulated. And once they’re registered, you can tackle a whole host of problems from fly tipping and rubbish up to the quality of the accommodation that often young people have been pushed into.

“I think we (TUSC) could inspire local people to get back involved in politics because it could make a fundamental difference in their lives.”

If you could sum up your campaign in a slogan?

“Send somebody to Westminster who’s going to shake up the establishment and who can’t be bought by the system.”