More than 1,000 people of all races, religions and colours stood together in Kingstanding last night in powerful message of unity in the wake of teenager Dea-John Reid’s murder. 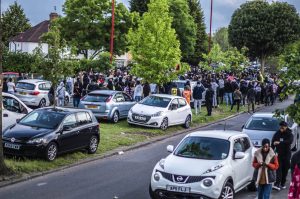 Tensions have been running high since the killing of the 14-year-old on College Road on Bank Holiday Monday and organisers of the Shine-a-Light vigil received threats demanding it be cancelled.

Standing on the spot where Dea-John collapsed from his wounds his mother was flanked by her family, church leaders and politicians.

Bishop Desmond Jaddoo, who organised the vigil, told Erdington Local: “We have shown we are loving and caring people. 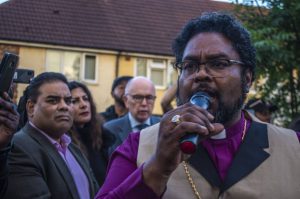 “We know race played a part in this but we showed we are bigger than that and we must stand tall in the fight for equality and against knife violence in our society.

“This was a galvanising of communities of black, white, and Asian in Kingstanding who have come together to show we will not tolerate hate and racism.”

He added: “There were silly messages going round but we are not going to let threats stop us doing what we are doing, which is doing good.”

People began arriving for the vigil at 8pm and by 9pm a crowd of more than 1,000 packed pavements, College Road and central reservations to hear a succession of speakers and prayers. 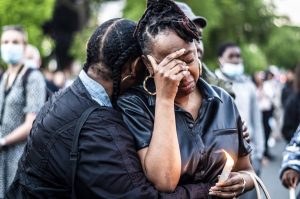 As the sun went down behind Twickenham Road candles were lit in honour of the schoolboy whose teenage friends shed tears and gave each other support.

Young men were especially the focus of religious leaders, being overwhelmingly the most likely to be the victim or perpetrator of knife crime in Birmingham. Fam

ily, friends and supporters also let off balloons and shout their support for grieving mother Joan Morris and her family. 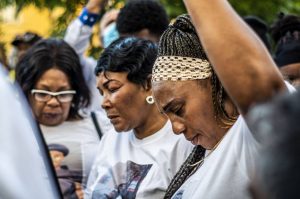 Holding her hand Bishop Jaddoo called out to the crowd encouraging them to support Joan, who responded in kind.

He said: “We must respect what this mother wants. She wants unity. She does not another mother to go through what she is going through. We must support her.”

Mr Dromey said: “It was a deeply moving act of sympathy and solidarity with Joan his mom grieving for her son, 14, who died on the streets of Kingstanding. 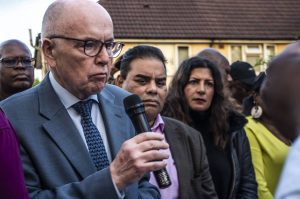 “It was an immensely powerful assertion that we will not let our community be divided or ever to be scarred by racialism. It was cry from the heart of the community that no more men can die of knife crime.

“Over 1,000 people were there from across the spectrum, all races, all backgrounds, all ages and it was a fitting tribute.

“What was so important, as well as the support for Joan, was the show of unity from the community because there were real risks terrible crimes like this can divide communities.” 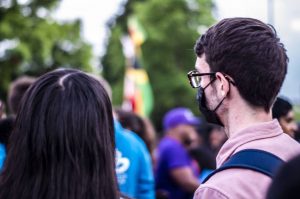 The murder led to churches across Kingstanding and Birmingham to work together in a bid to calm tensions and call for unity.

Minister Malcolm Oliver, from Erdington Methodist Church, said: “The churches had to do something. What was lovely tonight was seeing all these people coming together, in a good atmosphere. OK, there was a smell of cannabis but apart from that it showed people were relaxed and were praying together.

“As Christians we have to stand up when we know something is not right, and because of Covid the different churches had been speaking to each other so we could come together and respond to something like this.”

There was a large police presence in Kingstanding throughout the day and evening but during the vigil were discreet and remained out of view from the majority of the crowd. 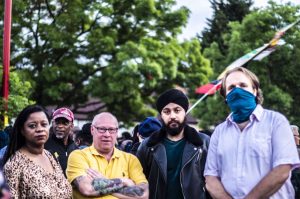 They kept a presence on Hurstwood Road and were on hand to arrest a man who was shouting racial slurs, pretended to have a bomb, attacked motorists, and tried to bite a labradoodle. Police, however, were adamant this was not connected with the vigil.

When crowds had dispersed, around 10.30pm but a minority remained officers began ordering individuals to vacate the area.

One of the last groups remaining were three youngsters dressed in proto-military outfits with logo ‘Forever Family’ and matching sunglasses. They chanted street poetry, marched on the spot and saluted as well as giving the Black Power salute. 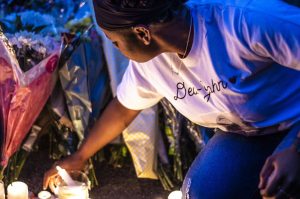 The group’s leader Raspect Rebel Lion said: “The turnout was good, but it is not over yet. Our work is not done.”

He then challenged a motorist who pulled up and told those milling about to “drive over the first white person they see” telling him “don’t do stuff like that.” Other black women and men also scolded the driver.

Steel Pulse’s back catalogue is full of songs highlighting racism, injustice and racist killings, including the murder of American teenager Trayvon Martin. 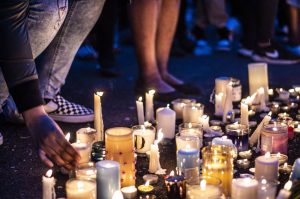 Amlak Tafari told Erdington Local: “I am glad I came here tonight. The youngsters of today showed they have had enough of living with racism. There was a time when something like this would have led to buildings being burnt down.

“But that we are still having to hold these kind of vigils in response to one of our own being targeted is just ridiculous.

“I go all over the world touring with Steel Pulse and see communities being persecuted so to come home and see this makes me feels no progress has been made as a society.”

Anyone who can help West Midlands Police with their investigation should contact them urgently via Live Chat on www.west-midlands.police.uk/