John Taylor Hospice in Erdington gave a local family a precious day to remember thanks to a special visit from some feathery friends. 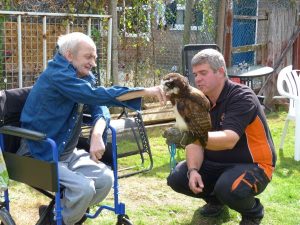 David Gilchrist and his family saw their Erdington garden turned into a bird show when Andy Plant of The Falconry Centre in Hagley brought along a few feathered friends.

It was a dream come true for 65-year-old David when he came face to face with a host of birds of prey including a bald eagle, two owls, an American kestrel, and a peregrine falcon.

David, who has the respiratory condition chronic obstructive pulmonary disease (COPD), has been supported by teams from John Taylor Hospice for two years.

As his condition has progressed, care has been stepped up to meet his needs – including creating special memories.

David’s family had organised a short holiday including a visit to a falconry centre for the life-long bird of prey enthusiast but faced disappointment when David became too poorly to make the trip. 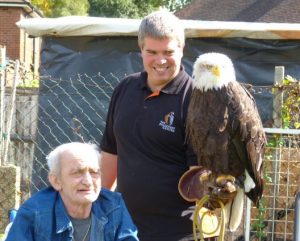 But the team at John Taylor Hospice stepped in to arrange the visit from Andy along with a buffet so that other family members could share this special moment and enjoy the treat.

The event was made possible because David is part of the Personal Health Budget (PHB) project – a scheme in which patients are given control over how they choose to spend health and social care finance.

The scheme has been pioneered in Birmingham by John Taylor Hospice, Birmingham and Solihull Clinical Commissioning Group, and Birmingham Voluntary Service Council, working in partnership with Birmingham City Council (via the Better Care Fund). PHBs can be used to fund different services including home care, gardening or laundry and making special memories such as the Falconry event.

David’s daughter, 40-year-old Gemma Grantham, said the personalised care has made all the difference.

“I can’t say enough about how much the hospice has helped Dad,” she says. “He was diagnosed nine years ago and we’ve been living with that ever since. 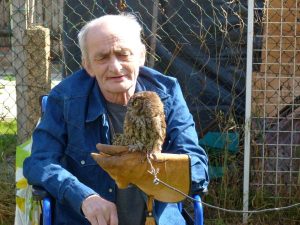 “We were put in touch with the hospice two years ago and it has been such a help.

“They explained the personal health budget to us and that has meant we’ve been able to access so much extra help. We have been able to have day sits and night visits which have really helped and the people who come can’t do enough for Dad. We’ve seen a real improvement in Dad’s mental health through getting this support.

“The last few months have been really difficult as Dad had to go into hospital twice and both times we said goodbye to him – but both times he’s come back to us.

“The first time he was having real breathing problems and the second time he had fallen and had to have a hip operation. With COVID-19 we were really worried about him going into hospital but he’s managed well both times.”

And the icing on the cake was the special visit from The Falconry Centre. Prior to the most recent Birmingham lockdown regulations, David was joined in the garden by his family including his three children, Gemma, Andrew and Rachel, and his nine grandchildren to see the birds.

“We were all so disappointed when we realised Dad was too poorly to go on holiday,” said Gemma. “So this has been a real treat – not just for Dad but for everyone.

“I still can’t believe the hospice has been able to do all of this for Dad. He’s really enjoyed it and I can see what a difference it’s made.”

John Taylor Hospice PHB Project Lead, Jan Hipkiss, said: “It was a real privilege to help David achieve his dream of seeing, once again, the birds of prey he so dearly loves and making this wonderful day come true for him and his family.

“Through the personal health budget project we have been able to provide individual care, support and special memories for many patients and their families. This new way of delivering healthcare is ensuring it is the patient who is at the heart of their own decision-making.”