A dying Castle Vale schoolgirl’s wish to see EuroDisney is a step closer after £4,600 was raised in a month by big-hearted friends, family, and the community. 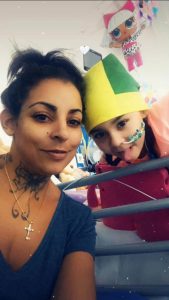 Six-year-old Kionne Holding, who has an incurable rare form of epilepsy, wants to go meet the Little Mermaid with the rest of her family – but due the specialist disability travel arrangements the holiday could cost £10,000.

However, when her mother Keena Cespedes, who has been at her daughter’s side for the last 93 days at Birmingham Children’s Hospital, launched a GoFundMe page (Kionne’s Fund) in August there was an overwhelming response.

Keena, aged 37, told Erdington Local: “I can’t even begin to say how amazing people have been since I told people about Kionne, friends, family, and strangers have sent me messages of support and my daughter presents.

“I put up the GoFundMe page without thinking anything would happen, I would have been happy with £50 but it feels like the whole of Castle Vale has got involved, as well as people across Birmingham. 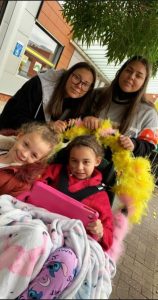 “We have now raised more than £4,600. I know times are hard for people, so it really means a lot people are donating.”

Keena remembers Kionne as a bubbly, funny, lovable child before last November when she suddenly began having seizures and headaches. Two months later she was diagnosed with small tumor on her brain and a rare form of epilepsy called Lennox Gasture Syndrome.

Her condition deteriorated and she in the last nine months she’s lost the ability to walk, talk and eat. Doctors have given her various drugs, treatments, and alternative remedies but all to no avail.

Keena said: “Due to all the drugs she is on she does not understand what is being done for her and all the love people have for her, but we still are hoping to take her to EuroDisney with her sisters.”

Tragically Keena has already had to have a conversation with specialists about Kionne’s end of life care.

She said: “This syndrome has taken everything away from her and is slowly killing my baby. She is unable to walk, eat for herself, and now her speech is going. She now speaks like a three-year-old not a six-year-old. She cannot be treated and there is no cure. I’m coming to terms with my baby dying and the little time we have left with her. 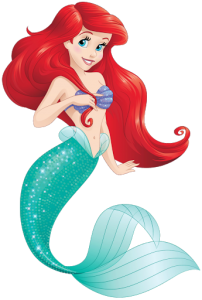 “All I want to do now is make her life as amazing as possible and one way is to get her on holiday with her sisters who she loves so much.”

And due to the coronavirus pandemic, Kionne has been unable to get visits and cuddles from her three sisters.

Keena added: “Only I can go and visit her because of COVID-19, Kionne misses her sisters and they miss her but there is nothing that can be done about that – that is why it would be wonderful if we could all go away together. We would need specialist care when we are there and have to stay in adapted hotels, but it can be done and we are hoping to go early next year now.”

Castle Vale fundraiser Lee Crofts has now cycled the distance from “The Ressies to Dover” and also organised a reggae brunch at Minworth Social Club.

He said: “We’ve had amazing gestures of support with events, raffles set up, prize donations, and raised £500 in a day.

“The little superhero is fighting the hardest fight of all, so let’s make the dark days a little brighter and give her. Her wish of a holiday with her sisters to make some priceless memories.”

To sponsor Lee as he continues his bid to cycle, run and walk the distance to Paris, click here to visit the Kionne’s Wish PayPal page. 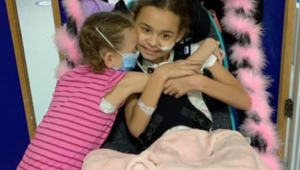 The Chivenor Primary School pupil has touched the hearts of the nurses at Birmingham Children’s Hospital, where she has been for the last three months.

Nurse Victoria Mulligan posted on the GoFundMe page: ‘I have had the pleasure of looking after Kionne and every shift she brightened my day with a massive smile and huge hug.

‘She holds on to you so that you can’t leave her side, she sings to you, she makes you laugh, she is super brave and absolutely deserves to go on holiday which will never make up for all she has gone through but will give her and her family an experience of happiness to remember forever.’

For more information or to donate to Kionne’s Fund visit: www.gofundme.com/f/kionnes-fund

To sponsor Lee Crofts – as he cycles, runs and walks the distance to Paris – visit the Kionne’s Wish PayPal page here: www.tiny.cc/qpaysz