Helping to feed vulnerable people across the city, Big John’s have pitched in to support Erdington residents during the coronavirus crisis – donating 100 parcels to the food bank being run from George Street Baptist Church in Stockland Green. 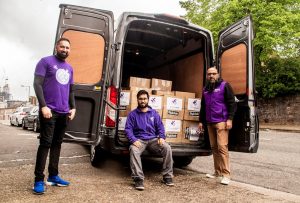 Organised in conjunction with the international Human Appeal charity and the Anzal Begum Foundation – the latter set up to ‘continue the visionary charity work of Anzal Begum’, the mother of Big John’s founders Jongir and Bob Siddiq – the food parcels were prepared by volunteers at Big John’s warehouse in Newtown, then taken directly to George Street Baptist Church.

Packed with essential provisions and staples for home cooking – including pasta, milk, sugar, cereals, biscuits, juice, tinned tomatoes and tinned soup – the 100 parcels taken to the Stockland Green based food bank were the last in 1000 that the ‘neighbourhood takeaway’ have donated throughout Birmingham.

“I remember the struggle, when we’re trying to source the items,” Ambreen Khan – Head of Fundraising for the Anzal Begum Foundation.

“A lot of the suppliers were rationing as they had to meet their own demands, as well. But the relationship that Big John’s have with some of their suppliers, and then the Anzal Begum Foundation working with Big John’s on behalf of their late mother, that really helped source the items – it’s a really big thank you to all those suppliers who helped us source these items to go out to families and individuals.” 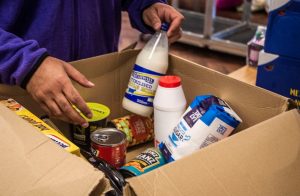 An Erdington born business, Big John’s have grown to be a prominent food outlet throughout the Midlands – bringing an ‘American food dining experience to traditional British and world favourites.’

Opening its doors in 1995, with the first of the franchise launched at the Six Ways Island in Erdington, Big John’s now have 12 branches located throughout Birmingham – alongside one in West Bromwich and one in Leicester.

But during the coronavirus crisis, when many businesses have been forced to close and all restaurants asked to shut their doors, Big John’s have been able to continue serving customers through deliveries and takeaways – as well as helping to feed people in the local community, especially those having trouble accessing food or basic provisions.

“We just want to continue some of the great work that our late mother was doing in her lifetime,” tells Bob Siddiq, founder of both Big John’s and the Anzal Begum Foundation, “supporting local communities, supporting local causes – whenever someone’s in trouble, to be there for them. So, we decided we’d set up this (Anzal Begum) foundation in memory of what she was doing in her lifetime and continue that work.” 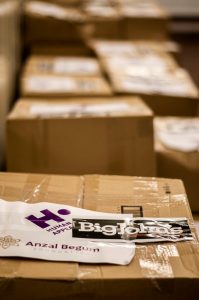 Big John’s used their contacts in the UK food supply chain to help others, organising for 1000 parcels to find their way to the city’s food banks and support services – an act of community that reflects the month of Ramadan, currently being celebrated by Muslims across the country.

But true kindness is secular, with the Siddiq brothers and their partners at Human Appeal and the Anzal Begum Foundation working alongside charities from all faiths and backgrounds to help feed the city’s most vulnerable.

“One of the most important things we’ve seen here (Erdington/Birmingham), in Britain, and in the UK,” tells Zahir Khan – Director of Fundraising for Human Appeal, “is how people have let any sort of divide… that had previously divided us – in terms of colour, creed, religion, culture… I’ve seen everyone drop all the differences and really come together. For us, as Human Appeal, a faith based charity, it’s been a real honour to come together and support people regardless.”

“This is another fine example of the community spirit we have here in Erdington,” continues Jack Dromey MP, who first told Erdington Local about the food parcels being delivered by Big John’s. 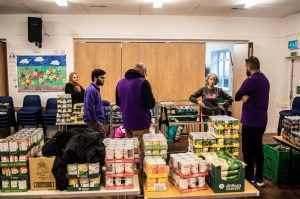 “Our local food banks have seen a surge in demand since the start of the Coronavirus outbreak, so these donations are very welcome and will provide much-needed support to some of the most vulnerable in our community.

“I’d like to thank Bob Saddiq and the rest of the team at Big John’s for this extremely kind gesture. It is wonderful to see a business that was started here in Erdington, and has gone on to be a great success, giving back to their community.

“I’d also like to thank every member of our local community who is supporting others through this incredibly tough time. These acts of kindness and solidarity will help us all come through this unprecedented crisis together.”

To find out more about George Street Baptist Church, including the food bank they are currently operating, visit www.georgeroad.com/

To find out more about Big Johns, including all their online menus and delivery services, visit www.mybigjohns.com/

To find out more about the Anzal Begum Foundation, visit www.facebook.com/pg/anzalbegumfoundation/

To find out more on the Human Appeal charity, visit www.humanappeal.org.uk/