Haroon Chughtai is the West Midlands Police Inspector responsible for Erdington and Sutton Coldfield, overseeing both constituencies. Erdington Local caught up with the area’s top cop, to find out more about the man behind the badge. 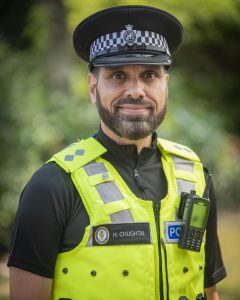 Now 41 years old, Haroon Chughtai joined the police force in 2003 – straight after completing his degree in Business and Computer Science at Birmingham University. Being made Police Inspector for Erdington and Sutton Coldfield in January 2020, Haroon manages the neighbourhood teams and police staff across the two constituencies.

He cites his reasons for joining the police as “wanting to give back to the community,” as well as wanting to be an example of diversity in the force.

“I knew nobody who was a copper, I had no family members who were police officers. At that time, there was more of a drive to get the police force more representative – more black and Asian people.”

This literal ‘bobbie on his bike’ cycles to work regularly, operating out of Erdington Police Station, and bemoans the fact that he rarely gets out the office. Instead, Inspector Chughtai spends much of his time in the office overseeing “70-80” cops.

“I’m lucky if I get out once a month,” Haroon says, but thinks that “sometimes it’s important that I go out and see something for myself.”

When asked about changes in his career during his 17 years in the force, Haroon says that he is impressed with the “technological changes” the police have embraced and in the way it helps them operates. And in the days of cyber-crime and Internet criminality, the police now have to “operate online more, with social media.”

Inspector Chughtai also believes that huge government cuts during his time have caused the police to make “difficult decisions” such as being unable to deal immediately with “petty theft and crime.” Police departments across the country have been pushed to make substantial changes over recent years, with 16% of spending declining between 2010-2019 nationally. 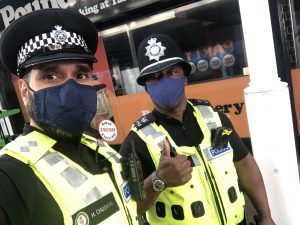 On the other hand, Haroon says that “The police force is much better at prioritizing things – based on risk and vulnerability. We deal with what needs to be dealt with immediately.”

During 2020, one of the biggest challenges for the local police force and for Haroon has been “the rise in domestic abuse”, with the Erdington Inspector estimating that domestic abuse accounts for “approximately a quarter of all Erdington’s crime.”

Victims are “predominantly women” with most offenders being male. This is also reflected in the rise of domestic abuse across the entire country since the start of the COVID-19 pandemic, with many violent relationships exacerbated during the national lockdowns.

Inspector Chughtai found policing during the first lockdown “really challenging”, noting the “really poor understanding of what the restrictions were. The compliance wasn’t as good as it is now [to the rules].” This included non-essential businesses remaining open illegally.

When asked by Erdington Local to predict the immediate future of his role in the area, Haroon said that “Sadly, I think COVID is here to stay – the enforcement around COVID will have to continue”.

Haroon is also committed to reducing “under 25 violence”, especially referring to young people leaving school, hanging around streets and bus stops, and causing violent crime.  “In the past these sort of things might not have been recorded as crimes. Behind the bike-sheds a couple of lads have had a fight, nobody would remember – but nowadays, it’s officially reported.” Haroon and his officers work with parents and teachers to keep track of these crimes.

“I’m using all the overtime I have to tackle under 25 violence. We don’t want to criminalize kids, but we want to put some interventions in really early on.”

Asking Inspector Chughtai what he’d like to see changed in Erdington, he responds “a rebalance of housing market, especially with the sheer number of HMOs and hostels. It’s got more than anywhere else in the city – over 1000 in one concentration”. He wants HMOs to be “spread across the city, rather than being concentrated in small areas.”

Haroon’s regular monthly updates on the West Midlands Police website often report crime in neighbouring Sutton Coldfield as decreasing, whilst general crime rates increase across Erdington. But when asked about his own personal impressions of Erdington, he says that “Erdington’s got a real strong community spirit. You can see with the Erdington Task Force, and the Stockland Green Action Group.”

He says that Erdington is “unique” and that other inspectors from other parts of the city are surprised at hear how active the community is.

“During COVID there’s been a load of people that have stepped up to help people that are needy, that are vulnerable,” explains the Erdington Inspector. “It’s volunteers that do that work – it’s really selfless.”

To receive updates from the Neighbourhood Policing Teams in your area, visit www.neighbourhoodalert.co.uk

To find out more about Erdington’s police force, visit www.west-midlands.police.uk/node/2710