Words by and pics by Adam Smith

On 18th October history was made in British football, and for my club Aston Villa. 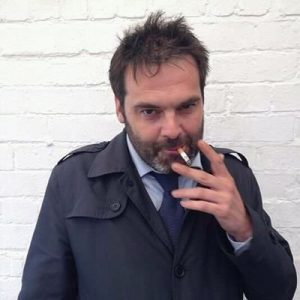 Not the good type of history, like winning the league with a record number of goals, but the bad kind of history. The kind of history people will remember in the ‘that’s where it all went wrong’ kind of history. Like when an alcoholic remembers the first time they drank hand sanitiser

The Villa‘s game against Leicester was the club’s first ever to be shown on Pay Per View (PPV), at an eye-wateringly price of £14.95. It was not long ago when you could actually go to Villa Park for £15.

The Premier League Ripper-Offer-in-Chief, Richard Maters, justified the price saying: “we believe we have a good product.”

Football without fans is awful, it’s like watching park football. It’s like decaf coffee, like sex in a spacesuit, like listening to music with only one earphone working. Without fans, football cannot be fantastic.

As a fan, the EPL is awful, we get ripped off at every turn and turnstile. Tickets are way cheaper in Germany, France, and Spain, and fans abroad can watch their teams play on terrestrial TV. We can’t, not since Sky made us pay for top flight football. In fact, our international counterparts can even watch English football teams on their TV for free… but in the UK, we cannot. 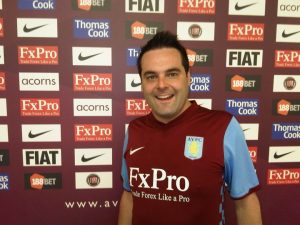 Champions League games used to be broadcast for free on ITV, but then because BT wanted more Internet customers they bought the rights – now, instead of a generation of youngsters watching inspiring English teams’ exploits for free, the Champions League now is the preserve of a tiny amount of people compared to ten years ago.

Even the term ‘product’ turns my stomach, like when football clubs began calling fans ‘customers’.

Calling someone a customer implies there is a choice to be made, but a real fan cannot swap teams. I did not choose to be a Villa fan; I didn’t have a choice. My great grandad preordained it, or maybe my great great granddad – by the time my nan and granddad were queuing for tickets in the 1930s they were both already from Villa families.

And even if I was an orphan, I grew up in Perry Barr, where the club started, and most my friends are Villa. My funniest memories are shared experiences with all them going to, or coming back from, watching the Villa – sometimes even what happened on the pitch is included in my mind’s mosaic of being Villa.

That’s why when a glory hunter tries to wind me up, I don’t care. I feel sorry for them. Yeah, you have your memories of watching a league win on TV… I’d rather have mine of not sleeping for two days after Villa got to the FA Cup Final for the first time since 1957 (when my granddad died two days before the cup final) in 2000, thank you very much.

I would rather choose to stream the game for free via one of the multitude of Middle Eastern based websites, that have sprung up to allow us just this option. I have plenty of friends who do.

The fact that these websites (and somewhat more dodgy streams) exist is part down to the geo-political spat between Qatar and Saudi Arabia makes it even funnier when the ‘global game’ is shoved in our face.

Who usually clinches the top spots in the Premier League? Usually the club whose owners own the most fossil fuels, that’s who. Human rights violators have earnt a seat at the top table of our game. So, if the other side of the ‘global coin’ is easy-to-find streaming sites then it shows the football money men can’t have it both ways.

But now, I can’t even watch games that kick off after 8pm in a pub because I’d miss the end of the match – thanks to video assistant referees (another nail in coffin of football, along with tackling being banned and drop balls mysteriously disappearing) the games last too long and will not finish before the 10pm curfew.

@premierleague just to point out fans have to pay @SkySports and @btsportfootball to watch our teams play live, on top of that you now want to start charging £14.95 for games, yet still you have us all off with this VAR nonsense. You really must think we are stupid. #VAR

It cannot be a coincidence when pubs had to close at 10pm, and households were forbidden to mix that, PPV was suddenly announced. The beautiful game’s bean counters have been itching to do this for years.

And what better than a national crisis to take advantage of?

The Premier League now can be added to the list of wrong ‘uns – along with bog roll hoarders, bog roll price hikers, and that Facebook friend with mush for brains who keeps on sharing those generic “I’m not wearing a mask” statuses.

My friend pays good money for his Sky Sports subscription, and generously gives me his password. (I’m enraged on behalf of his wallet he is now expected to stump up even more money to watch games he would expect for free.) The broadcasters obviously did not mention their plan to charge per games when he or any other customers signed up for a year or 18 months.

So, I don’t blame anyone for streaming Premiership games online ‘illegally’ – part of me thinks those people who show a match on their Facebook Live are cyber freedom fighters. 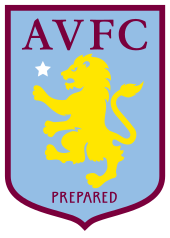 If a skint dad wanted his Villa mad kids to see the last day relegation decider against West Ham, but could not afford Sky or a trip to the pub, then I will lose no sleep if he finds a way, anyway, to have that bonding experience with his kids.

But one thing is for sure, £14.95 to watch a game of football on TV is more disgusting than anything in my search history.

I won’t degrade myself. And the Premier League should have more respect for all of us football fans.

To find out more about the Premier League, visit www.premierleague.com