Two men have been arrested on suspicion of attempted murder following a vicious attack in Springthorpe Green, Tyburn, at around 5.20pm on Saturday 28th August. 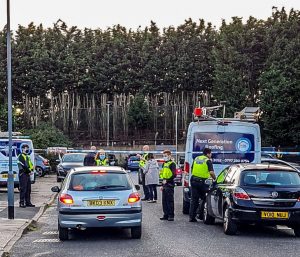 The quiet Erdington suburb became filled with emergency services yesterday afternoon, as armed police and ambulance crews responded to an alert – alongside Dog Control Units and a police helicopter circling above the local area.

West Midlands Police reported a 30-year-old was attacked with a knife and suffered serious wounds at the scene.

After being receiving ‘emergency first aid’ from responding officers the victim is now in a stable condition in hospital – his injuries are not believed to be life threatening.

The offenders reportedly fled the scene in a vehicle. 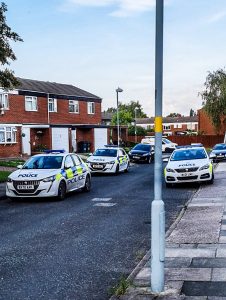 Following some ‘quick-time enquiries and intelligence checks’, investigating officers later spotted a van that was believed to be linked to the stabbing.

West Midlands Police further report the van ‘failed to stop for our officers before being abandoned in Chester Road. Two men ran from the vehicle but were arrested following a foot chase.’

Residents were told to stay in their homes as West Midlands Police blocked off the garages at end of The Feldings, Sprinthorpe Green – beginning an immediate investigation into the attack.

Locals trying to drive home were asked to leave their cars outside of the crime scene. 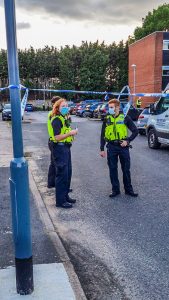 Two men aged 22 and 23 remain in custody for questioning, having been arrested for attempted murder. 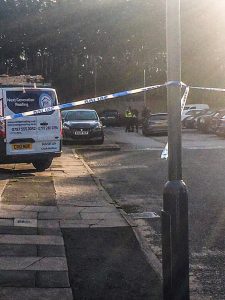 Superintendent Paul Minor from West Midlands Police said: “The victim has suffered serious wounds from what is believed to be a knife and is lucky to be alive.

“Our armed police attended the scene and performed emergency fast aid (an advanced from of first aid) to stem the bleeding before paramedics arrived.

“Our enquiries quickly led us to identify a vehicle we believe was connected to the stabbing and around an hour later we had arrested two suspects. That’s brilliant work from all the officers involved.”

West Midlands Police are e appealing for witnesses who’ve not yet spoken to them to come forward.

Anyone with information can message West Midlands Police on Live Chat via www.west-midlands.police.uk/contact-us/live-chat