On Friday 11th December, children from Story Wood School helped break the world record for the largest holly wreath – building the giant decoration around The Ring in Perry Common. 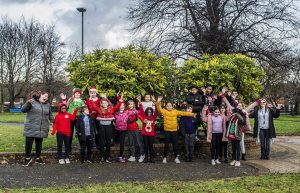 Measuring a staggering 358.3m in circumference and 136.1m in diameter, the giant wreath was made of holly branches from Sutton Park and Christmas decorations donated Birmingham City Council.

Circling the public playing area and green space that sits between Rosedale Road and Branford Road, the mammoth task was operated under social distancing and Covid safe conditions – with people working in bubbles along separate sections of the fencing. 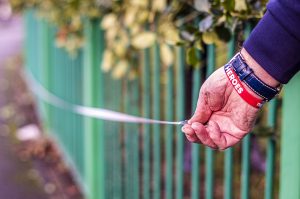 Measured by independent adjudicators and Erdington Councillor Robert Alden, the final count was filmed live – with the evidence now being sent to the Guinness Word Record organisation for its official endorsement.

To date, the record for the largest Christmas wreath has been held by D Presmec Dolge Njive from Volicina, Slovenia.

Completed on 1st December 2013, the pine, cypress, and grape vine wreath measured 316.82m in circumference and 100.85m in diameter – over 35m smaller than the Perry Common record breaker.

Bringing together people of all ages, from 9 to 99 years old, the Perry Common endeavour was a loud and proud community celebration – putting a positive full stop at the end of a year that has kept many friends, neighbours, and loved ones apart due to the coronavirus crisis. 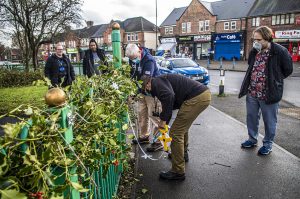 Across Erdington, people are mirroring the spirit of Witton Lodge’s record-breaking wreath – with initiatives such as the Light Up Christmas campaign, by local charity Active Arts, encouraging people to end the year with a bright smile.

Debbie Bates, Heath and Wellbeing Lead at Witton Lodge Community Association, said: “We’ve been thinking about lots of things to help celebrate Christmas and bring some Christmas spirit to everyone in the community. It’s been a horrendous year… but it was important that we still did something to bring the community together.

“We came up with the idea to put a Christmas tree in the centre of The Ring and inviting members of the community to decorate the tree with messages, wishes, and hopes. 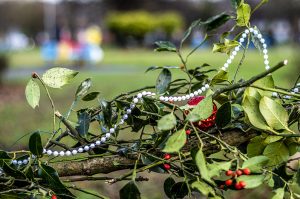 “From that idea sparked a conversation with John Porter from Sutton Park, who was cutting down holly, and we came up with the idea between us all to decorate The Ring.

“We’ve had volunteers, children from the local schools… we’ve had so many people come out.

“People walking their dogs, just wanting to take part and have a little conversation. They’ve said how pretty it looks; how lovely it is. How fabulous it is to have The Ring decorated and how nice it is to be part pf Perry Common.

“Isolation has been so difficult for so many people. The lovely thing is people have come back out (of their houses) to have a look and be part of this, to do some of the weaving. So, it’s been building people’s confidence to come back out into the community.” 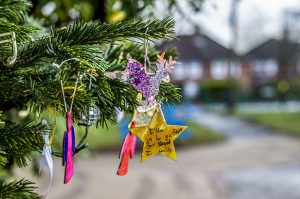 Part of the independent adjudicating team, Erdington Councillor Robert Alden joined the festive feat to mark off segments and calculate the final size of the record-breaking wreath.

“It’s almost been like taking part in a Christmas movie, you’ve had the community come together all behind this idea that Witton Lodge come up with – it’s been brilliant,” Councillor Alden told Erdington Local.

“It’s been incredible to see the children come out and take part too – they have been here all week giving up their spare time to come and take part in this record-breaking attempt. You’ve seen the whole community come together. It’s what Christmas is about, particularly in this year. 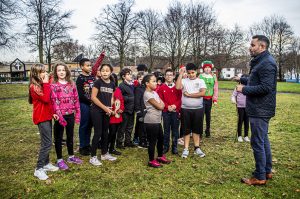 “What this is showing is the community in Perry Common; you’ve got this wonderful community who want to come together.

“We’ve seen people who haven’t been willing to come out of their houses for months take part, because they felt they could be part of the community again in a safe way.”

With one week left until they break for the winter holidays, the children from Story Wood School were excited to bring back some festive cheer to the community.

“It’s been amazing,” said the Year 5 pupils who were putting the final branches on the world-record breaking wreath. “It’s been fun watching the whole Ring turn into a massive holly wreath.” 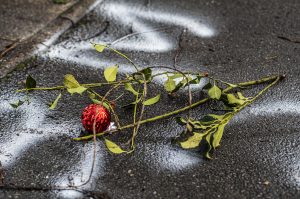 And whilst the year has been a challenging one for the local school children, when asked if they were feeling more festive after decorating This Ring the answer was a resounding “YEEEEAAAAHHHH.”

Central News also tuned up to film the record-breaking wreath in Perry Common, talking to local residents who helped build the giant decoration – watch the video below: