An application is underway for a Public Space Protection Order (PSPO) in Erdington, giving local police the power to forcibly remove anyone from the ‘Restricted Area’ they suspect is intoxicated or causing anti-social behaviour. 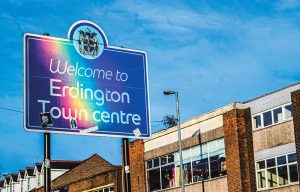 Starting on the corner of Oakfield/Wood End Road, the ‘Restricted Area’ continues down to and up Orchard Road – cuts across Sutton New Road, embracing Abbey Catholic Primary School and Highclare School, then comes back up Summer Road to Six Ways Island.

If successful, the application would see a PSPO come into force on 20 December 2021 – just in time for Christmas and the New Year, when alcohol related and street crime is often known to soar. If enforced the PSBO would run for three years, staying in place until 19 December 2024.

Public consultation is currently being sought, with any ‘interested person’ invited to appeal against the order via the Birmingham Be Heard website by 19 December. An ‘interested person’ is defined as ‘someone who lives in, regularly works in, or visits the restricted area’.

Full details of the PSPO application for Erdington, alongside a place to comment or appeal, can be found here: www.birminghambeheard.org.uk/place/erdington-public-space-protection-order-consultati/ 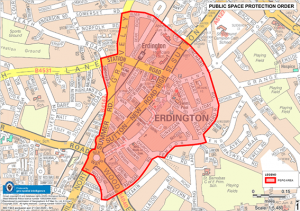 Led by the North Local Partnership Delivery Group (LPDG), the application for a PSPO in Erdington is seen by many constituency stakeholders as an essential step to help clean up the High Street and encourage public safety.

Policing across the West Midlands has suffered cuts of £175m since 2010, resulting in the loss of over 2200 police officers – including 50% of all allocated to community policing. The lack of uniformed officers on patrol has often been cited as the reason anti-social behaviour and street crimes started to spike.

Erdington previously held a PSPO which ran out in 2018, with many questioning why it was not immediately reinstated.

Terry Guest, Erdington Town Centre Manger, explained: “Now, there’s a few stories about why it hasn’t been renewed. One is that someone objected on the grounds that the PSPO included beggars, and there was an objection against the human rights of beggars – because initially the order included the removal of beggars off the High Street. 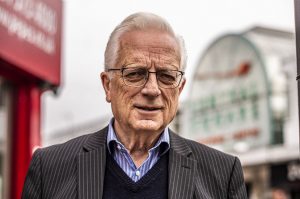 “It’s a bit of a contentious issue because one of the things I’ve been working with the police with is to help anyone begging if they’re homeless.

When asked about the application for a PSPO in the area he told Erdington Local: “I strongly support the reintroduction of a PSPO, I strongly support it. There’s no question of it, one of the problems here on the High Street is street drinking and sometimes the bad behaviour that goes with that. 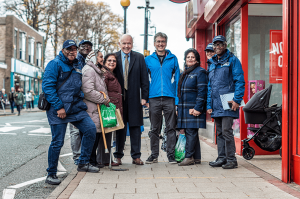 “Now there is an issue in relation to often vulnerable people who congregate here, therefore there needs to be support for those people to divert them from behaving badly in our community.

“Having said that I’ve just seen earlier today an incident with four people, one of who was clearly drunk – and this is 10am – who blocked the pavement and there was woman trying to get by with her buggy and they wouldn’t let her get by.

“Now that kind of behaviour is absolutely not acceptable, so clamping down on street drinking I think is an essential part in making people feel safe about coming to their High Street.”

As Erdington Ward Councillors, Robert Alden and Gareth Moore have been championing the fight to get a Public Space Protection Order restored in Erdington ever since the previous one expired without the Council renewing it. 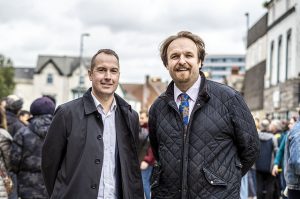 “Sadly the Council had not been acting with the urgency required to get the PSPO back in place in Erdington, despite all the efforts of the local Police and BID in providing evidence.

“Thankfully following this visit and meetings with senior officers from Community Safety in the Council we have managed to get the consultation launched for reintroducing the PSPO”. 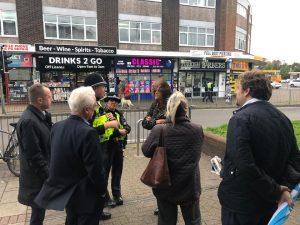 Cllr Moore added: “We have worked with the Police to also get the area the new PSPO will cover enlarged so that it can help tackle areas of concern in wider Erdington as well, for example down Station Road and Church Road.

“It is vital that residents now take part in the consultation supporting the PSPO for Erdington so that it can be approved to commence before Christmas and help keep residents safe.

“Thank you to the efforts of local Police, Town Centre Manager and businesses for working with us to help force the Council to finally get the consultation launched”.

For more on the application for a PSBO in Erdington visit www.birminghambeheard.org.uk/place/erdington-public-space-protection-order-consultati/