Local residents watched on today as thick black smoke billowed out from behind a residency near Pype Hayes Park. 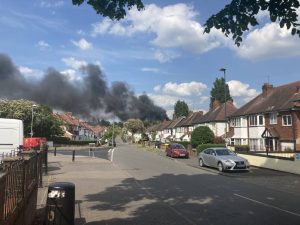 Two fire engines were called to the scene at around 16:08 on Chester Road – at the vehicle entrance to the park – as a large group gathered on the street to watch firefighters tackle the blaze.

The cause of the fire was identified as two mini-coaches that had been set alight, emitting thick smoke which filled the nearby roads – causing passing cars to come to a standstill as extremely low visibility made it dangerous for traffic.

Smoke was visible far across the local area, with local resident Sue Parker saying: “I saw the smoke from my back garden on Tyburn Road.”

Lisa Smith, who lives in Pype Hayes, told Erdington Local: “I could see black smoke billowing out whilst in my garden. I alerted my family members right away who quickly ran to the scene. 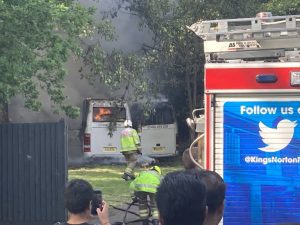 “Initially, we were worried that it could have been a neighbour’s house on fire, but fortunately this was not the case and nobody was hurt as a result of it.”

Another local resident, Tina Kerr, took a video of the scene from the Chester Road – warning people to stay away from the area as conditions got worse. Watch her video below.

Families attending Robert Wilkinson’s Family Funfair were also caught up in the chaos as the fire raged on not far from the event site, emergency vehicles and fire engines causing a congestion of cars wanting to leave the park whilst the incident was dealt with.

Once the situation was under control and there was no danger to public safety, the West Midlands Fire Officer in charge at the scene told Erdington Local: “there are no casualties, nobody was present at the scene when we arrived thankfully.” 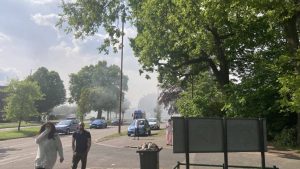 When asked what could have caused the fire, or if it could have started accidentally or naturally, he added: “it looks like a suspicious fire; we’re not treating it as accidental”.

The flames were soon under control, after multiple hoses were deployed with the second engine present at the scene leaving relatively quickly.

However, several curious onlookers stayed to watch as the firefighters continued to control the blaze, with one lady even buying some cold drinks for the emergency service staff from a nearby shop.

The fire has since been completely subdued and a team of investigators are now working to determine the cause of the multi-vehicle fire.

According to the public safety website fireprotectiononline.co.uk in the UK alone ‘there are approximately 100,000 cars fires and around 100 people are killed in a vehicle fire each year.’

Video of smoke across Chester Road – filmed by Tina Kerr