Erdington’s very own global UFC superstar Leon Edwards still believes he will be world champion this year but is now also determined to stop local youngsters falling into a life of crime. 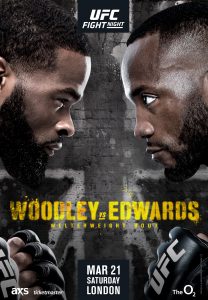 The 28-year-old’s plans for global domination were put on hold by COVID-19 but during lockdown he decided to fight knife crime by trying to get free gym memberships for poverty-stricken youngsters.

Currently on an eight fight winning streak and awaiting a welterweight title shot Edwards has shown in recent months he is prepared to use his celebrity status to further causes he believes in.

A spate of knife crime deeply affected Edwards after the video of his friend’s cousin being stabbed to death in Oldbury was widely circulated online. He immediately told his management and the UFC he wanted to do something, and now he and fellow UK fighters Darren Till and Jimi Manuwa are working on launching a new anti-knife crime organisation.

Edwards told MMA Junkie: “For me, I grew up in that same environment. I understand what these kids are going through and what’s going through their heads.

“I retweeted a video a few weeks ago on my Instagram about that kid getting stabbed in Birmingham – one of my friends’ cousins. It was heart breaking to actually see the video, because you hear about it all the time. On that same day, that video of that guy that got stabbed, there was another three stabbings in that same day.

“So, I messaged my management straight away and said ‘what can I do to help?’ And set something up that can help and prevent this. Jimi Manuwa reached out to me literally the next day and he was saying the same thing as me and it would be good to get Till involved as well.

“We all came from the same situation as these kids. We all understand the kids. I think martial arts changed our lives and it can hopefully change someone else’s life.”

He added: “At first the plan that came was like we are going to join someone else’s organisation. Our thing is though we want to do our own thing. We want to do it in our own way. We don’t want to join a pre-existing organisation. So at the moment it’s bouncing ideas, speaking to the UFC – they want to be involved as well. We think we are going to be doing our own thing with the UFC. It’s moving forward and we are getting more people involved which is good.”

Edwards, who was due to headline a global UFC event against Tyrone Woodley in March in London before the sports world came to a grinding halt, understands lack of money for local youngsters is a major problem.

He added: “It’s about getting them into martial arts. Some of these kids don’t have money to come to the gym and can’t afford the memberships. So somehow we are trying to get it so the government can help us get these kids in the gym for free basically by covering the costs and we teach them, we mentor them and use the UFC to help as well..”

The Jamaican born fighter, whose brother Fabian is also an MMA star, added: “It’s been going on for a very long time now. Youth violence in the UK, especially Birmingham and London knife crime, it’s been massive.

“I’m trying to bring awareness to it and trying to see what I could do to help, because I remember being in environments like that growing up as a kid with my friends, so I would love to try and help and put awareness to it.” 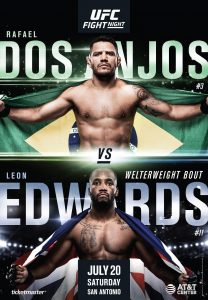 The former Aston Manor Academy pupil admitted he could easily have fallen into a life of crime growing but his mother forced him to join a gym.

He added: “When I grew up as a kid, I was involved in gangs and stuff like that. My mum took me to the gym to keep me away from my friends, to try and make a better life for myself.

In January, Edwards secured his financial future by penning a multi-fight deal with Las Vegas based UFC after becoming a fan favourite with his signature post-chinch elbow move.

In a statement released through his management company Paradigm Sports, he said:  “I am excited to re-sign with the world’s foremost MMA promotion.

“I have had an incredible run in the UFC thus far, and this contract secures my financial position as I make my run towards the welterweight title.”