Workers at GKN Chester Road’s factory will be on ‘all out continuous strikes’ from Monday September 27, a statement from Unite the Union announced today. 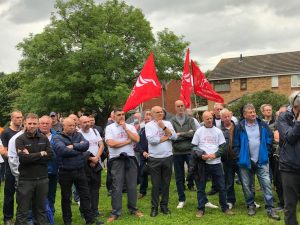 Earlier in the month, Unite the Union held a ballot for industrial action with 95% of workers who voted saying they were in favour of strikes.

Unite general secretary Sharon Graham said: “GKN’s cynical attempt to close its Erdington plant is a disgrace. We will not stand by and let this employer offshore British jobs without a fight.

“We will leave no stone unturned in the ongoing battle to ensure the future of the Birmingham factory and our members.”

Unite national officer Des Quinn added: “Melrose GKN has grave questions to answer, if it has taken government money for research and development and now intends to use what it has developed abroad, that is a betrayal of the workforce, a betrayal of Birmingham and a betrayal of UK taxpayers.”

In January 2021 GKN Driveline owners Melrose PLC announced plans to close the Chester Road, with production being moved to plants in Poland and France – making over 500 Erdington workers unemployed.

Hopes were the Erdington factory could play a key part in the electrification of the UK’s automotive sector, building the new propulsion units needed in electric vehicles.

But despite repeated efforts from Unite the Union, Jack Dromey MP for Erdington, and the Chester Road factory staff, Melrose have remained steadfast in their plans to close the Chester Road site.

“Regretfully, therefore, we are proceeding with our proposal to close the site. Supporting our people continues to be our priority.”

Jack Dromey MP raised concerns over the future of the Chester Road factory when Melrose took over GKN back in 2018.

Since the closure was announced at the start of the year, Mr Dromey has been working with Unite the Union to negotiate a deal to save the Erdington factory.

In response to today’s announcement, setting the date for strike action as Monday September 27, Jack Dromey MP said: “For the past eight months, the 519 workers at GKN Chester Road have fought hard to explore all possible alternatives to closure of the Chester Road site.

“In that time, GKN/Melrose have rejected the workers’ comprehensive alternative business plan and since then have flatly refused repeated invitations to enter further discussions about how to save the plant from closure. 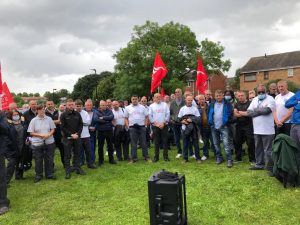 “GKN/Melrose have shown nothing but contempt for the workers and what is at stake for them and their families and also the great damage closure will inflict on the local economy.

“Faced with such intransigence by GKN/Melrose and their intention to push ahead with closure by summer 2022, the workers have been left with no alternative but to take strike action.

“The workers have mine and the local community’s 100% support. As their local MP, I and their trade union, Unite, will continue to explore all options to keep jobs and production at Chester Road.

“We believe there is a way forward and we stand ready to enter any talks to save the plant. GKN/Melrose and the Government must now show the same commitment.”