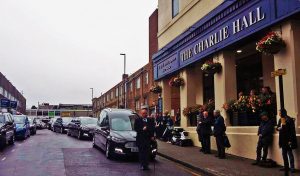 Patrons stood in silence as the parade of cars stopped outside the pub, breaking out into a spontaneous round of applause when the funeral cortege moved on.

The procession also stopped in front of the Village Green, where Paul had worked before moving to The Charlie Hall. Crowds of regulars stood outside the busy Stockland Green pub as a mark of respect before the cavalcade of mourners moved on to Sutton Crematorium, where the 41-year-old was laid to rest.

The majority of the 25 strong Wetherspoon staff then celebrated their friend’s life at The Erdington Club, where they released balloons into the sky with personal and heartfelt hand-written messages. 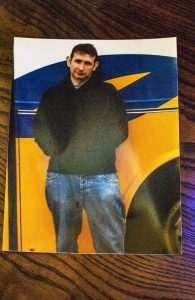 Liza Flynn, who has worked at The Charlie Hall for 20 years and served side by side with Paul for 18 years, said: “It is a sad day as we have so many great memories of Paul.

“He was a great colleague and a wonderful father; he idolised his children. He had such a great sense of humour and that is what we all miss about him the most.”

He said: “He was not just a brilliant barman who knew what I wanted before I ordered it but he was so accommodating about everything else.

“When I got my smartphone, which wasn’t so smart, he explained everything about it and downloaded what I needed. He was a lovely bloke, which is why I felt I had to come to his funeral today.”

Paul’s sudden death from a heart attack last month sent shockwaves through Erdington and beyond, the founder and chairman of Wetherspoon Tim Martin even paid tribute to his employee who served pints for 18 years for the company. 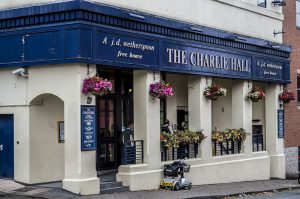 In a message to Paul’s family, friends, and colleagues, sent through Erdington Local, the pub chain owner said:

“I’m extremely sorry to hear the very sad news about Paul. He was an exceptional member of the team for many years, extremely popular with both staff and customers. Our deepest condolences to Paul’s family and friends.”

The loving Tyburn Road husband and father left a gaping hole in his family’s life and those who worked with him.

Charlie Hall 20-year-old barmaid Sian said: “He used to walk his children past our house every day and always tried to make them all wave hello. 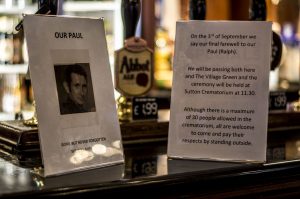 “He was such a lovely guy; he was always ready with a joke and all us young barmaids used to joke he was like the funny uncle we never had.”

Fellow barmaid Tiegan Patterson, 20, added: “He was 41, so was he was old to all us young barmaids, but he was always ready to help and always had a joke ready to tell.”

Current colleagues, staff and ex-colleagues swapped fond stories about Paul throughout the day and all promised to ensure his memory is never forgotten.

From everyone at Erdington Local, we send Paul’s family and friends our deepest condolences.

To find out more about the Charlie Hall in Erdington, visit www.jdwetherspoon.com/pub-histories/england/west-midlands/the-charlie-hall-erdington

For more on the wider Wetherspoons pub chain, visit www.jdwetherspoon.com