Erdington MMA star Leon Edwards has been fored to pull out from headlining UFC Fight Night 186 in Las Vegas after testing positive for COVID-19. 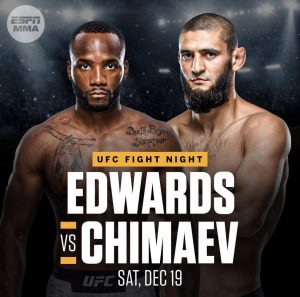 Catching Covid caps off a dreadful year for Edwards who has unable to fight due to a string of pandemic related cancellations, match-up disputes, and injuries.

Edwards not only tested positive but was laid low by the disease losing 12Ibs in four days and being unable to train, meaning the best-case scenario is the two reschedule a fight in January.

Edwards tweeted: “Another setback, but when you come from the mud you learn to put everything in perspective.

“This virus has affected many lives and families much worse than mine.”

He said: “Looking forward to getting this rebooked soon, thank you all for the well wishes.”

Another setback, but when you come from the mud you learn to put everything in perspective. This virus has affected many lives and families much worse than mine. Looking forward to getting this rebooked soon, thank you all for the well wishes

Headlining UFC Fight Night 186 in Las Vegas against the much hyped Chimaev would have cemented Edwards‘ place on the global sports stage.

Edwards and Chimaev could not have had more contrasting years, Edwards not stepping in the octogen once – whereas Chimaev burst on the UFC scene winning three fights in the first round since July.

Crucially Chimaev has impressed UFC supremo Dana White, who needs another global superstar after the retirement of Khabib Nurmagomedov.

The UFC temporarily removed Edwards from the welterweight rankings last month due to “inactivity” but reinstated him as world number three when the 29-year-old accepted the fight with Chimaev.

Edwards has been calling out competitors on social media, after refusing a short notice world title shot against Kamaru Usman in July led to him consistently being overlooked for big bouts.

I'm still in the rankings. Fuck all the inactivity, the only reason I havent fought is because all these so called top guys turned me down.

Khamzat want to fight then?

Edwards told MMA Fighting beating Chimaev will guarantee him a world title shot due to the interest in the fight.

“That was my thinking going into this. The UFC loves him. Dana [White] loves him. They all think he can’t be beat. When I go out there and take him out, I can’t see what they can say next to give me my title shot. I’d be on a nine-fight win streak. I believe this was the fight to make and now here we are.”

He added: “I know the UFC’s probably banking, Dana anyway, I know he’s praying that this kid wins, but I’ll be way too much for him in there, I’m telling you,”

This time last year the former Aston Hall Academy pupil was one of the hottest properties in the UFC with his signature post clinch elbow move making him a fan favourite.

On an eight-fight winning streak, one of the longest current unbeaten runs in the sport, Edwards was rewarded by headlining UFC London on March 21 at Wembley Arena. A win against legendary fighter Tyron Woodley would have given him a world title shot against champion Karamu Usman, however, the event was cancelled to the first UK lock down.

Though not a title eliminator, a rearranged Las Vegas fight will give Edwards the platform to increase his fanbase in America and stop one of the most hyped new fighters in UFC in his tracks.

The last UK fighter to top the bill in Las Vegas was boxer Tyson Fury in February, who won the heavyweight championship of the world when he dismantled Deontay Wilder in one of the greatest British sporting performances of all time.

Fury described why headlining a major event in Las Vegas is so special for any British fighter.

He said: “I always dreamed of seeing my name up in lights on the Las Vegas strip and being the main attraction.

To find out more about Leon Edwards, visit www.ufc.com/athlete/leon-edwards

For more from UFC, visit www.ufc.com