The first Street Pastors were commissioned this week, with a ceremony taking on Saturday 18 September. The uniformed support workers are set to become familiar faces in Erdington patrolling the High Street. 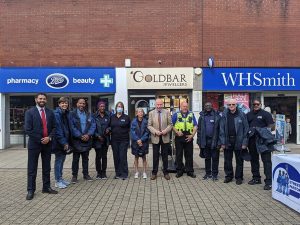 The outdoor commissioning ceremony was held near Costa Coffee, where 12 volunteers from local churches were given the relevant powers by The Ascension Trust to become Street Pastors.

First launched in 2003 in Brixton there are now 240 towns and high streets in the UK where The Ascention Trust have trained volunteers to provide a reassuring presence during the day and night.

Erdington Street Pastors chairman Rasaq Ibrahim told Erdington Local: “This has been a journey of ten months to get to this point.

“We had a target of 20 pastors to start with but at the moment we have 12. We will be recruiting more in October and I urge anyone who believes they could be a street pastor to get in touch. 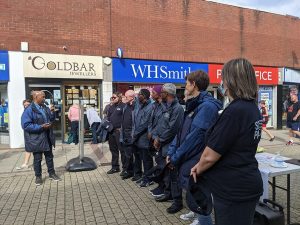 “Eventually we hope to patrol the High Street every day but for now we can only do twice a week, Mondays and Saturdays for a few hours at a time.”

He added: “We will engage with everyone on the High Street, no matter their race or religion, we want to be recognisable and be there to help people who need help.”

Mel Taylor, from Six Ways Baptist Church, was commissioned as a Street Pastor and is looking forward to starting his role.

He said: “I have lived in Erdington for a long while and have seen the difference food banks have made so I wanted to get involved.

“Through the foodbank I have got to see the problems local people face and I think being a Street Pastor will help me help others.” 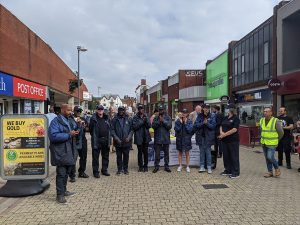 He said: “The High Street has been in decline for years and the launch of Street Pastors initiative is a landmark.

“What we badly need is local people, from the churches, patrolling the High Street combating crime and anti-social behaviour but also reaching out to the vulnerable.

“I think it is an outstanding initiative and will hopefully go some way to tackle people who are causing problems for the High Street.”

He added: “The Street Pastors along with the investment we hopefuly will get from the Levelling Up fund will make a huge difference to Erdington High Street.”

Assistant West Midlands Police and Crime Commissioner Tom McNeil spoke to the Street Pastors and members of the public on the High Street. 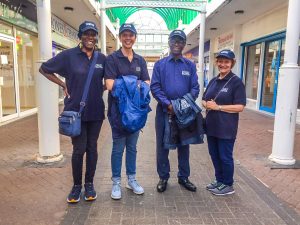 He said: “We support the Street Pastors and are very grateful for the work they will be doing.

“The PCC Simon Foster is very aware of this project and is happy to be funding it and he has said he will go out with the Street Pastors as soon as is possible.

“The kind of work Erdington Street Pastors will be doing is so important because people will respond to them as they will know they are coming from a place of compassion, and they will be part of the community.

“The privilege is ours and we look forward to working with the Street Pastors in the future.”

If you believe you could be a Street Pastor email chair.erdington@streetpastors.org.uk and for more information – or visit www.ascensiontrust.org/street-pastors