Getting tested for Covid is a matter of life and death, this was the stark warning given by Erdington MP Jack Dromey at the site of a brand new mass testing facility – which could be open in Erdington as early as next week. 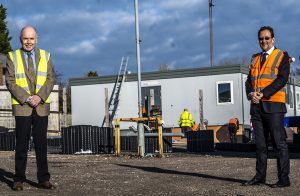 Construction of the testing facility began on Friday 26th November, after Mr Dromey brokered an 11th hour agreement between the Department of Health, Birmingham City Council, and the NHS.

The Erdington based facility was the last testing site signed off by the Government, but a licensing issue held up construction and put the entire project in danger.

Speaking at the old Colliers site, Orphanage Road, where the centre is being built, Mr Dromey told Erdington Local mass testing offers a route out of Tier 3 restrictions for Birmingham.

He said: “We needed a facility that enables thousands of local people to be tested in Erdington.

“There were delays concerning it being approved but thankfully they were sorted out, it should take two days to build and then a few days to get the facility ready and it could be open as quickly as the end of next week, when the national lockdown ends.”

The MP admitted getting all the relevant agencies and departments to work together on the project was not easy. 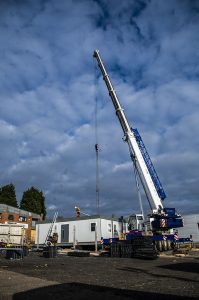 He said: “To begin with it was like pulling teeth but progressively it got better; I’d like to thank NHS Birmingham and Birmingham City Council for their hard work in delivering the facility.”

The Erdington MP is in no doubt how important mass testing will be in the fight against controlling COVID-19 and saving lives.

He said: “Here and now, as we don’t have a vaccine yet, the message is test, test, test. So I say to the citizens of Erdington come and get tested.

Erdington residents will be able to book a test either online or by using 119, walk to the testing facility, take a test, and then they will be notified of the results between 24 and 72 hours later. A recent trial of mass testing in Liverpool reduced the R-Rate and helped the city escape Tier 3 restrictions.

The MP added: “We discovered this week that Birmingham will enter into the highest level of restrictions, Tier 3, following the end of lockdown on Wednesday. The whole city must now pull together in order to drive down the spread of the virus and get us out of Tier 3 as quickly as possible.

“Tier 3 restrictions will be devastating for many businesses and workers across Birmingham. In particular the hospitality industry, and the tens of thousands of people it employs in the city, will be severely impacted.” 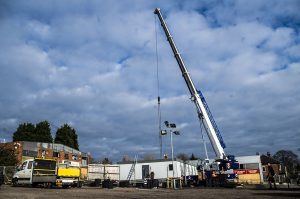 He added: “We have seen from the recent trial in Liverpool, that mass testing is an extremely effective way for us to reduce the R-rate and exit Tier 3.

“This testing facility will therefore play a crucial role in Birmingham’s response to COVID-19 this winter and I’m very happy Erdington residents will have the best possible access.”

Joining Mr Dromey at the site to see construction begin was Damien Siviter, Group Managing Director of Seven Capital who own the former Colliers site.

He said: “This has been a great example of how the public and private sectors can work together. We were approached about two weeks ago to see if the site could be used for a testing facility and we did everything we could to make it happen.”

The Covid testing centre could be on the site between three and six months and, if needed, could be turned into a vaccination station.

Mr Siviter confirmed the long-term plan for the site remains a new supermarket and housing estate to be built.

For the latest or NHS Test and Trace (England) and coronavirus testing (UK), visit www.gov.uk/government/collections/nhs-test-and-trace-statistics-england-weekly-reports