Hundreds of motorists were stopped from returning home on Friday after scores of bikers blocked up Kingsbury Road, near Tyburn House Island. 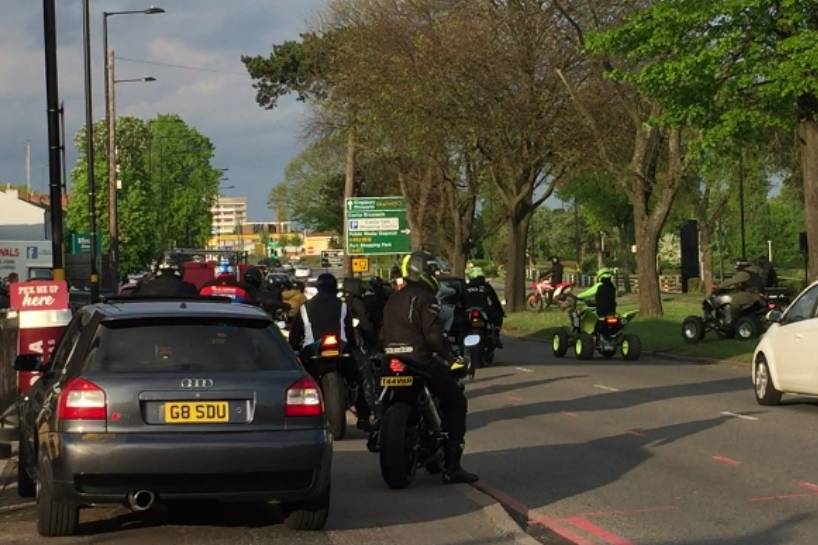 At around 6:30pm, a large gathering of motorbikes and quad bikes swarmed across the two lanes of traffic and onto the central reservation – many trying to buy petrol from the Shell garage.

As the gang of bikers grew in number, some began driving up and down the dual carriage way and grass embankment – performing ‘wheelies’ and ‘donuts’, leaving deep tyre marks across the central reservation. One daredevil was seen ‘careering’ into the early evening traffic with one wheel off the ground and both hands in the air.

With around 50 bikers blocking the throughfare, tired motorists could do nothing but sit it out and wait for the chaos to subside.

Jules Cox, 43, told Erdington Local: “I was sitting in the Burger King car park – I had just finished work in Erdington and was on my way to Castle Vale, pulling in to get a drive through and make a phone call. 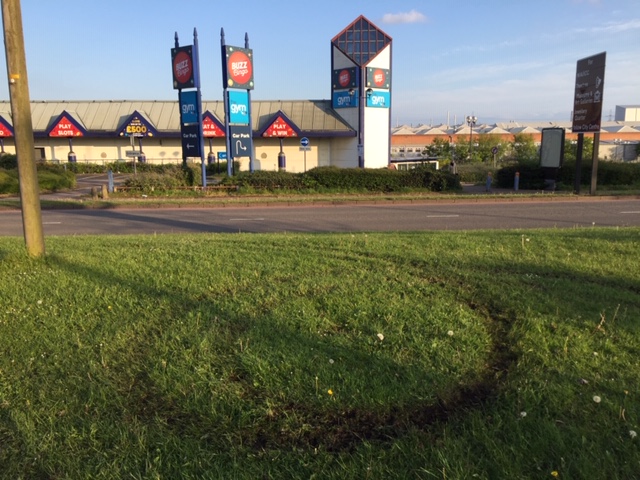 “Suddenly I heard what sounded like cars on a racetrack, then about 10-15 motorbikes – high cc expensive looking ones – came careering down the Kingsbury Road and pulled up onto the central reservation.

“Within about five minutes there were maybe 40-50 motorbikes and quad bikes, but some were in the Shell garage next door and I couldn’t see the exact number.

“Pretty quickly they had blocked that whole side of the Kingsbury Road and traffic started to back up. The bikers were riding up and down both the road itself and the grass in the middle, doing wheelies and donuts.

“It was more annoying than threatening, but I wouldn’t have suggested challenging them. With that many people being reckless on high performance bikes, with the kind of adrenalin that brings, you never know what will kick off.” 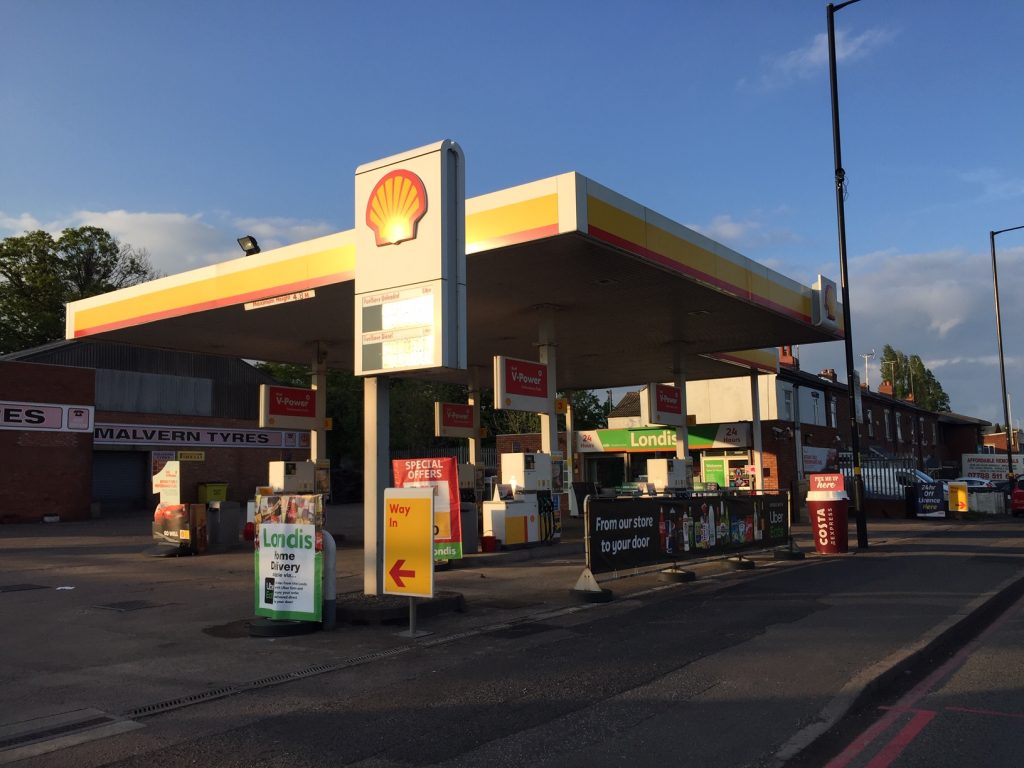 A deliver driver collecting orders from Burger King, who didn’t want to be named, added: “I think they had come from town; there had been a lot of bikes in the city centre earlier waving flags and making noise.

“They didn’t bother me making my deliveries, but it is dangerous. Although I used to live in Italy and you would get hundreds of bikers together there, this is nothing compared to that.”

The Shell garage quickly put a ‘Closed’ sign in the window and waited for the bikers to move on.

Staff from the garage told Erdington Local gangs of bikers come to the garage about once a month, but never in such large numbers – they were worried about people driving off without paying.

Motorbikes are responsible for around 19% of all road traffic fatalities, according to a report by the Department of Transport. Over extended driving, calculating deaths per billion passenger miles, motorcyclists are over 100 times more likely to die in an accident than those in a car. 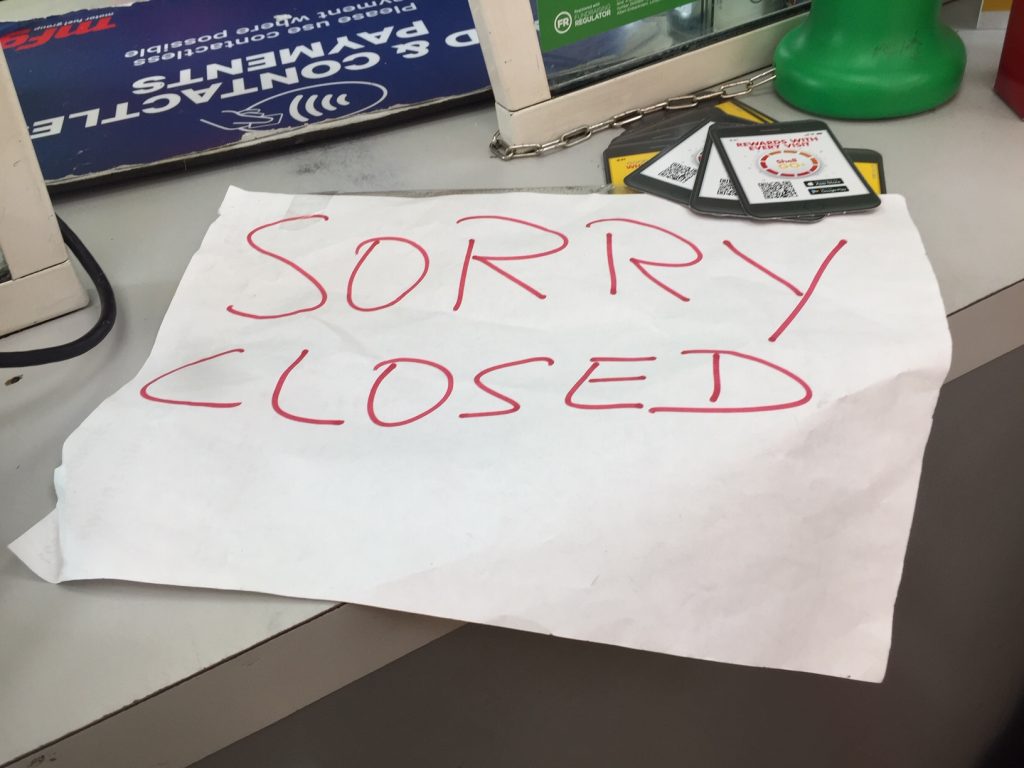 West Midlands Police had to be extra vigilant during lockdown, with dangerous drivers taking advantage of the empty roads and using them as their own personal racetrack.

Following an arrest earlier this year, where the offender was jailed for 14 months, Traffic Sergeant Mitch Darby, said:

“Anti-social off-road biking is a real concern for our communities. We’ve responded by running operations to catch offenders and they will continue throughout the summer.

“Anyone who rides dangerously – or rides an off-road bike illegally on public roads or in parks – runs the risk of being arrested and having their bike seized and crushed.”