Accomplished guitarist Reuben Reynolds, 29, has lived in Erdington for most of his life – one of many hidden talents in our local area. 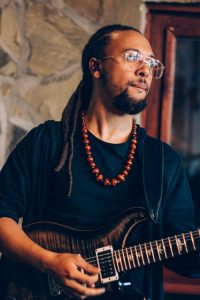 Falling in love with the guitar around age 15, Reuben graduated from Coventry University with a ‘Professional Practice’ Music Degree. His earliest musical interests reflect his eclectic playing style: “Jimi Hendrix, Carlos Santana, Green Day, Reggae music. These are like my early influences.”

Living in Erdington, but gigging all around the UK and abroad, Reuben has a hectic and varied life as a freelance musician. “My schedule is split between a few days teaching, performing, creative sessions, production, recording sessions dotted around.”

A travelling troubadour, Reuben teaches weekly outside of Birmingham – including at the Evelyn Grace Academy in Brixton and Uppingham School, a boarding school in East Midlands.

He also has private, one-to-one tuition with clients and is often booked for workshops, for a day or a few weeks, as a tutor. Teaching, for Reuben, is “rewarding” as it’s a chance “to connect with people who are less experienced, or people who are just coming up. It’s good for me because it keeps me connected with learning.”

A staple part of the music scene in Birmingham, Reuben has performed at many venues – big and small. He also works on a monthly event at Mama Roux’s in Digbeth called ‘The Unique Experience’, a regular showcase promoted by his longstanding musical partner Call Me Unique: “I would organise the band and lead the band, sometimes I wouldn’t even be playing! I tend to do a lot of house band events like that.”

In 2017 he performed at the world famous TED talks when the series came to Birmingham. He was the guitarist for Lumi HD – a Nigerian born, Birmingham-raised singer-songwriter, with a small ensemble. He’s no stranger to venues such as Town Hall or the Hippodrome, large music venues that can seat hundreds of spectators. 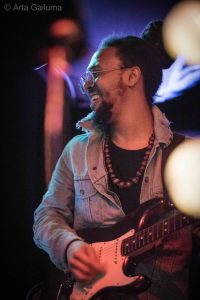 Reuben comments that his biggest audience was around 2000 people at the 02 Shepherd’s Bush Empire in London. Although he hasn’t been keeping score, giving a high quality performance no matter what the numbers on or off stage: “I try to play as if it doesn’t make a difference – It doesn’t matter if it’s 100 or 1000, I just play.”

Taking a piece of Erdington out into the world, Reuben has performed in France, The Netherlands, Poland, Bulgaria, Germany, and even North Carolina – playing as part of Soul or Gospel bands in various festival tours. He was due to tour in Germany this year, although this was cut due to COVID-19 – cancelled thanks to coronavirus, like a lot of his work.

Erdington Local previously spoke to Reuben about his thoughts on how musicians first responded to the coronavirus crisis – in our ‘Saturday night cabin fever’ feature, first published in April this year.

During the lockdown Reuben stayed positive, enjoying “more sleep”, a chance to reconnect with other creative projects, and to teach over Zoom. Now he notes a “significant loss of work” and especially bemoans the fact that he missed “summer – the most significant season for performing.” He lost three weeks of work working with Punch Records too, where he was teaching up to ten students every day for three weeks.

But as lockdown eased and live music in the UK was able to resurface, albeit in a limited capacity, Reuben has been back gigging around Birmingham. Performing as part of a function band at Digbeth’s ‘Zumhof Biergarten’, Reuben laughs: “people aren’t allowed to dance – it’s a bit strange, when you’re playing song about dancing!”

Reuben also plays with a trio and was booked to play a series of quirky gigs in residential spaces in Handsworth this summer. Bringing music directly to the people, he performed in “open garden type areas outside people’s homes within earshot of their windows.” Residents were elated to be listening to live music from their balconies, performed in the open green space below. “I haven’t really done things like this before,” tells Reuben. “Lockdown has made people think of different ways to bring art to people.” 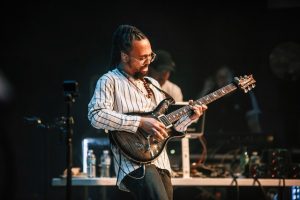 He was also booked to perform by the Erdington Arts Forum to support a family fun day in Erdington. With nothing but a gazebo, a battery powered amp, and vocalist Tavelah Robinson, Reuben’s makeshift duo were able to entertain kids with a two hour selection of upbeat music on Spring Lane Playing Fields – despite the unorthodox circumstances and unpredictable weather. Check out the video below.

When asked about the wider arts scene in Erdington, Reuben says: “I know about Oikos Café and the Secret Art Space Studios, but I feel like that’s all there is to know.” He acknowledges that “there’s a lot of musicians” but grieves that “there aren’t the type of venues that have live music, it seems. If you go up to Sutton (Coldfield) there’s seems to be more activity.”

Nonetheless, Reuben loves Erdington’s location in the country so he can gig anywhere, and the convenience of the high street.

By the sounds of things, Erdington isn’t going to lose this home-grown talent any time soon.

To find out more about Reuben Reynolds, visit www.instagram.com/reubzmusic