Castle Vale Stadium boasts three football pitches, a function room, bar, a maximum total capacity of 1500, and an enviable amount of parking. It is now owned by The Pioneer Group, who recently hired Dave Travers as the new stadium manager – coming into post just before lockdown. 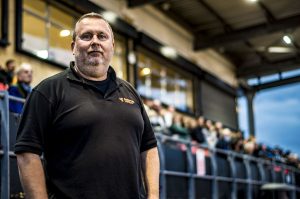 An engineer for 30 years, “designing press tools and making components for aerospace companies,” 50 year old Dave Travers leapt into stadia management some five years ago – as a keen volunteer at Boldmere St Michael’s Football Club. His aptitude swiftly led him to become full time as the commercial director for that club.

“When I first joined [Boldmere] they had one adult team, one junior team. It became my job, and then when I left Boldmere St Michael’s they had over 60 teams playing under the St Michael’s banner.”

Now firmly on the Vale, Dave has encouraged two prominent local teams – Castle Vale Town and Romulus F.C. – to run their football training on the same evening, helping the sport to help itself. 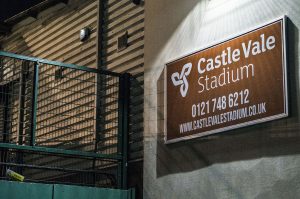 “To me, if you’re a club – this is what we did at Boldmere – you can have peer coaching. There’s nothing better than under 10s joining an under 8s session, and them trying to be a leader as such. It’s great experience for them.”

At its centre, Castle Vale Stadium houses a four year old ‘3G Artificial Turf’ pitch – allowing matches to be played “52 weeks of the year – the only thing that stops us from playing football on this is snow. If it’s windy, rainy, sunny, you can still play on this. It is a fabulous football pitch.” There are two further grass pitches that require regular maintenance, which can also be used for other field sports and events.

Looking to further drive the site’s revenue, Dave is yearning for the bar to be more accessible and recognised on the Vale: “I wouldn’t say the bar had any regulars at the moment, it’d be nice to encourage them.” 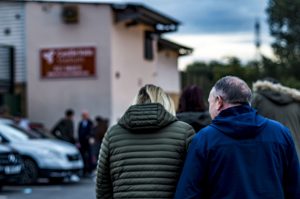 He wants the function room to be utilised and has already accepted an “over 50s men’s group,” for regular bookings.

On top of this, the newly appointed manager aims “to open the little hatch as a café for match days, although that might take a month or two to get off the ground.”

But football is at the heart of Castle Vale Stadium, on the pitch and off. As the centre becomes more popular post-lockdown, diving full throttle diving into the F.A. Cup, Dave anticipates larger crowds and the need for more helping hands. 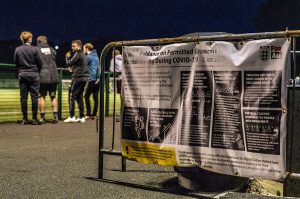 “Now we’re getting busy, the stadium actually needs more staff. Bar staff we’re looking for, and someone young and dynamic who wants to work under me and see the inner workings of a football stadium.”

Football is a sport with a passionate spectatorship, so it has been a challenge for Dave to keep people abiding to the two meter rule necessary to ensure safety during the COVID-19 pandemic. The stadium ensures that no more than six people sit next to each other in the same bubble.

But the stadium manager is pragmatic and he is resolute about safety: “you’ve just got to use your noggin,” says Dave, having to cope with ever changing guidelines, “we can only fit 25 people in the bar due to current regulations.” 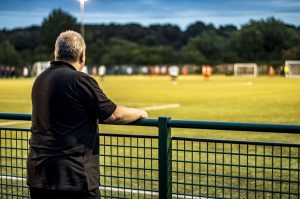 Dave’s concentration is also set on preparation for the F.A. cup season. “The beginning of the season is very stressful. Now is the busy time as you have to get all schedules in,” he tells, sounding jubilant about the match between Romulus F.C. and Coventry Sphinx later that night.

“Tonight’s the first round of the FA cup. To get to the final – most boys dream about playing in the F.A. cup sometimes – as daft as it seems, they’re only 13 games from being away from the F.A. cup final.”

Whilst the weekly fixtures and management at Castle Vale Stadium will take up a lot of Dave’s time, his soul is still with the community. 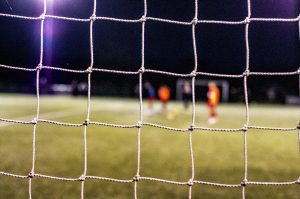 He wants to plan a fun day in “July next year… Fields sports, general sports, family facilities where you can play rounders.” He fondly reminisces about times he dressed up as a clown and as Santa Claus for various family fun days in his previous role at Boldmere St Michael’s.

Whilst Dave quips with a wry smile that he’d “rather just be watching football”, his passion for organisation for the ‘The Beautiful Game’ is palpable.

Asking him what it takes to do his role, he responds: “It’s everything, isn’t it? There’s the financial planning, pitch planning, customer liaison – it takes in a hell of a lot of spheres. You have to have a thick skin as well.”

To find out more about Castle Vale Stadium, visit www.castlevalestadium.co.uk

For more from The Pioneer Group, visit www.pioneergroup.org.uk