Recently commissioned under the Queens of the Commonwealth project, four Edrington artists from the collective were asked to paint portraits of inspiring women from the Commonwealth – to be hung in Birmingham Museum & Art Gallery.

But one was too big for a museum wall…

Erdington Local caught up with Bunny, the talented creative behind the cherished Coton Lane mural reviving a street art trend.

The mural of Caribbean born, Erdington resident nurse Louvina Moses on Coton Lane, just off the High Street, is not just a pretty face. 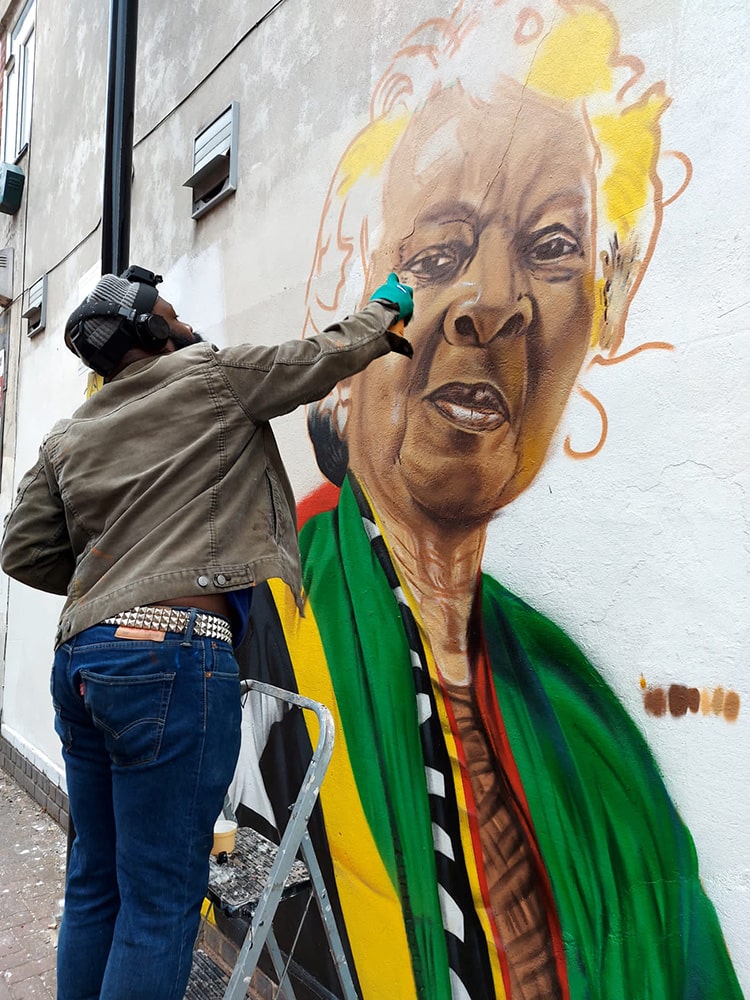 The mural, painted by Erdington artist Bunny, also known as Create Not Destroy, is one of the first visible artworks of a transformative exciting new art movement. Bunny joined the Erdington Artists Conversations collective in November last year, and after a successful start – and some daring ideas – there is real hope every empty Erdington wall will be adorned by art.

If Helen of Troy was the face which launched a thousand ships, then Louvina’s face could launch a thousand murals across Erdington and further afield.

Bunny told Erdington Local: “We wanted to bring artists in Erdington together, and our first meeting in October at the Secret Art Studio Space; there was just six of us in the freezing cold.

“What has happened since has been amazing, we now have a real diverse group of artists, young, old, every colour, Muslim, Christian, you name it. But everyone is connected together through a love of art.

“We meet every month and have really great discussions about art. But what really gave us a boost was when we were approached by those running the Commonwealth Queens project to help them create 22 portraits of women.

“As soon as I saw a picture of Louvina and a video of her talking, I knew I wanted to paint her. Her face shows such a journey; she, like my parents, came from a Caribbean island to another island all those years ago and made such sacrifices. Her face tells so many stories.” 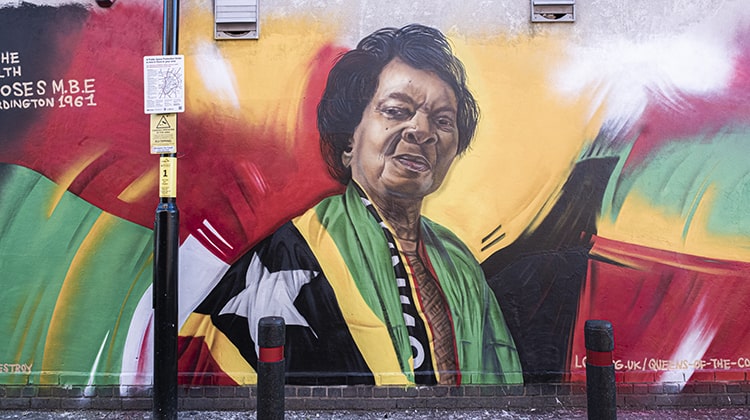 He added: “I asked if instead of painting a canvas portrait whether I could create a mural on a local wall, they loved the idea and it has taken off from there.”

From the moment Bunny pitched up on the corner of Coton Lane to paint the giant mural, he knew the people of Erdington would take it to their hearts – just as many did with the mural around the hoardings of the old Maplin site.

He said: “I spent as much time on the ground chatting to people than I did up the ladder painting. People were so interested what I was doing, normally they would walk past me without giving me a second glance but when I start painting murals people are suddenly interested.

“There is a real appetite for art in Erdington, through our (Artists Conversations) group we know there is talent in the area and art can make a difference. I want art to become part of Erdington, like how the murals and art really are part of Brixton; there is no reason why Erdington cannot be the Brixton of Birmingham.”

Father-of-two Bunny, who lives near Six Ways island, began his art career in the mid 1980s, incorporating painting, photography, videography, music, aerosol art, and graffiti. But his renewed love for mural making was sparked two years ago when he was asked to paint one in honour of an old friend in London. 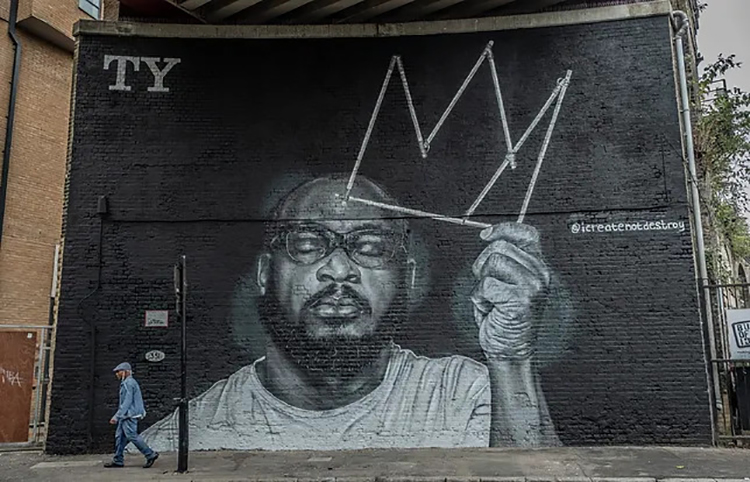 Bunny said: “Social media has really changed art. In the old days we would travel miles to look at a wall with graffiti or a mural, now people can see what you have created on their phones and give instant feedback.

The 55-year-old added: “This got me back painting murals. They are within the open realm, they are there to provoke a reaction, whether people love it or hate it they will look at it.”

Those who will be taking more than a second glance at the dignified lady emblazoned in the colours of St Kitts are her Louvina’s children, grandchildren, and great grandchildren, many of whom live around Erdington.

Louvina was born in Tabernacle Village in St Kitts in the Caribbean in the 1940s and left for Britain with her husband in 1961.

She said: “I came to England when I was pregnant but left two children behind as well as my parents and grandparents who I missed, but leaving my children was worse than anything.

Louvina is still married 63 years later and featured in Queens of Commonwealth documentary, which celebrated the migrant women who helped to rebuild the UK after the Second World War. 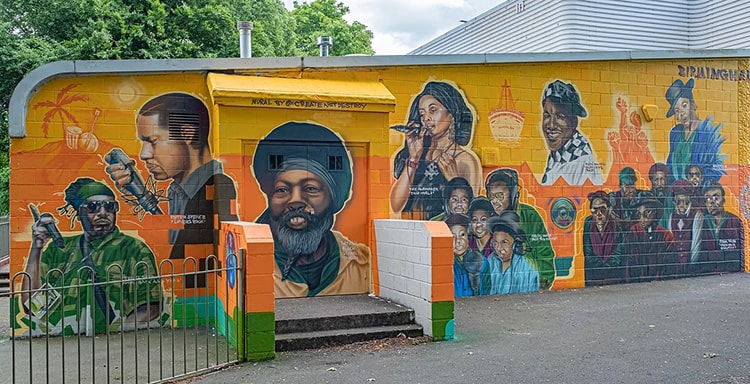 The 22 positive stories of the women contrast vividly against the backdrop of the Windrush Scandal, which saw the British Government illegally deport Caribbean pensioners who had lived in the UK for decades – many of whom are yet to receive compensation.

Louvina, known to many as Rose, unsuccessfully tried to become a teacher in the 1960s but finally got a job in the NHS at East Birmingham Hospital.

She said: “There was racism by my white colleagues, they gave me the hardest time; I was given the worse jobs all of the time.”

However, Louvina stood her ground in the NHS and worked for 43 years at Heartlands Hospital until her retirement.

She continued: “One day at work my manager called me and told me I had been chosen to go and have tea with the Queen at Buckingham Palace, I could not believe it. We sat just behind Maggie Thatcher.

“Buckingham Palace! I never thought I would get to the door, let alone get inside. If you are a poor person back home you would never think you could get to Buckingham Palace. I went back again when one of my sons got an MBE and it was easier then.

“I tell my children, stand up for yourself, you can’t go backwards in life you want to move forward in life. You have to take each day as it comes, live for today and praise God for tomorrow.” 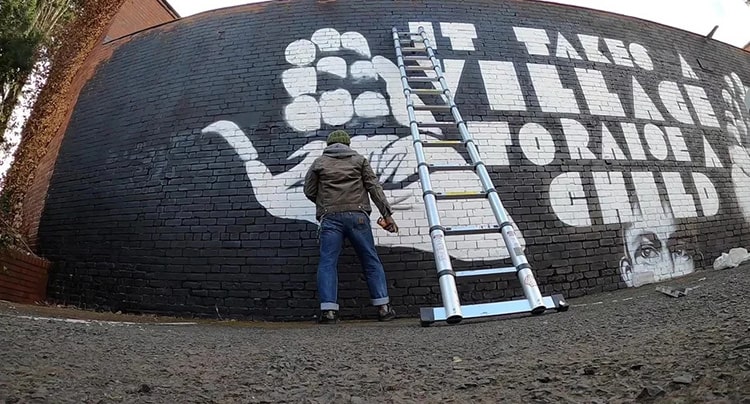 An active Louvina instilled the desire to give back to the community into her children, her son Lincoln was awarded with an MBE for his work with youngsters and setting up the Holford Drive Community Hub.

He gathered siblings, cousins, nephews, and nieces for an epic photo underneath the watching eyes of Louvina at the mural, although the matriarch missed the gathering as she was back in St Kitts.

Lincoln told Erdington Local: “My mother is my Queen, she and my father have been together for 63 years, they are an inspiration.

“The Queens of the Commonwealth did a great job reminding everyone the hard work and sacrifices my mother’s generation went through to give their children a better life.”

He added: “She loves the mural, we all love the mural, from one come many! Bunny did an amazing job and hopefully it will be there for years to come.”

Bunny said: “It was an absolute honour to paint a remarkable woman like Louvina and shine a light on the huge self-sacrifices her generation made to help others, and become the backbone of institutions like the NHS and the transport industry.” 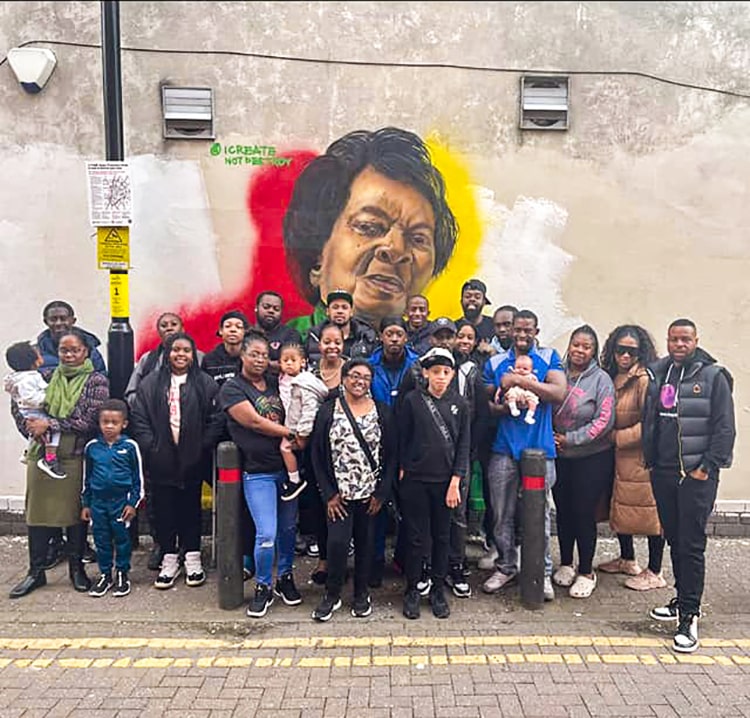 Shortly after Louvina appeared near the High Street, another Erdington local who came from the Caribbean has been immortalised by a mural – new UFC welterweight champion Leon Edwards.

Bunny, who recently created the Lozells art trial featuring pictures of local reggae stars, said: “It is great to see another mural pop up in Erdington after Louvina, and I another one will appear soon. I have been commissioned by Erdington Litter Busters to design a mural.

“So, Louvina will be the first of many, now every time I see an empty wall or space I am thinking what mural could we put there.”

For more on Bunny / Create Not Destroy visit www.createnotdestroy.com

Erdington Artists Conversations are held every on the third Wednesday of each month, from 7pm to 9pm, at the Secret Art Studio Space in Central Square on Erdington High Street.

Free to attend, for more information on Artists Conversations call 07966 699 894 or email: erdingtonartists@gmail.com