Erdington High Street has been the centrepiece of many recent political battles – from clarion calls for more community policing and a Public Space Protection Order, to ambitious regeneration plans that could bring in millions, a buzz has been returning to the once vibrant throughfare. 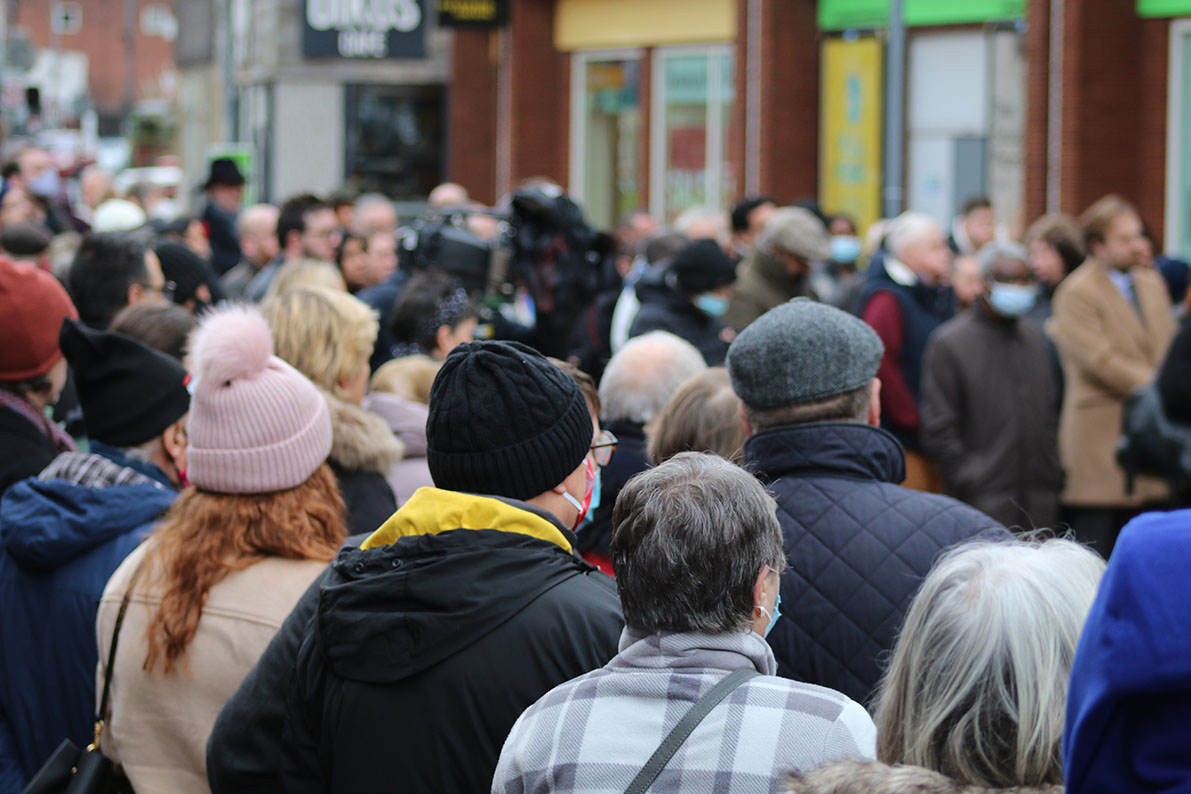 But on Sunday 16 January the High Street stood still, as hundreds gathered to pay their respects to “a giant of Birmingham politics and a very, very good man.”

Just over a week beforehand, the Erdington MP Jack Dromey was discovered dead at his constituency residence. Following ten days of shock and sadness, this was the day people came to say their goodbyes.

“We’re all Jack’s friends,” exclaims Gerard Goshawk, the well known minister from Six Ways Baptist Church who is introducing speakers onto the stage – a temporary platform outside the Co-op on Erdington High Street – and reminding the bipartisan crowd they are indeed just that.

A fierce trade unionist before being elected MP in 2010, Jack Dromey was known as a dyed in the wool “Labour man”, but also a canny campaigner who would extend a hand “across the political divide” to get the job done. 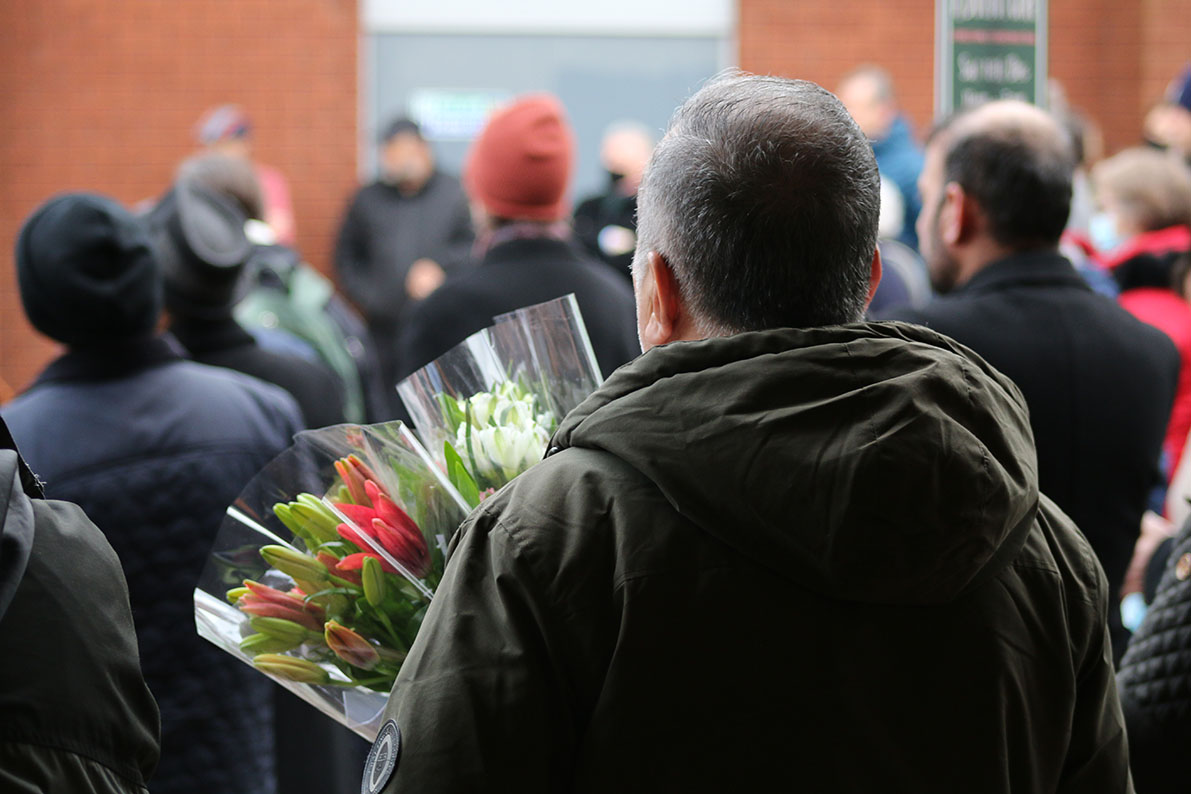 Standing shoulder to shoulder at his memorial are the leaders of both the Birmingham Conservative and Labour parties, further reflecting the impact of a man who, as Cllr Ian Ward would later state on stage, “was never blinkered or tribal when it comes to working constructively”.

Also in attendence are local campaign groups such as Short Heath Fields Trust – who despite spending much of their time locked in heated debates with Jack Dromey, maintained a healthy respect for a politician who ultimately “kept his word.”

Organised by the Erdington Covid-19 Taskforce, of which Jack Dromey was a “driving force” behind, the memorial is being delivered by two organisations who knew the late MP well – Witton Lodge Community Association (WLCA) and Active Arts – alongside Reverend Gerard Goshawk. 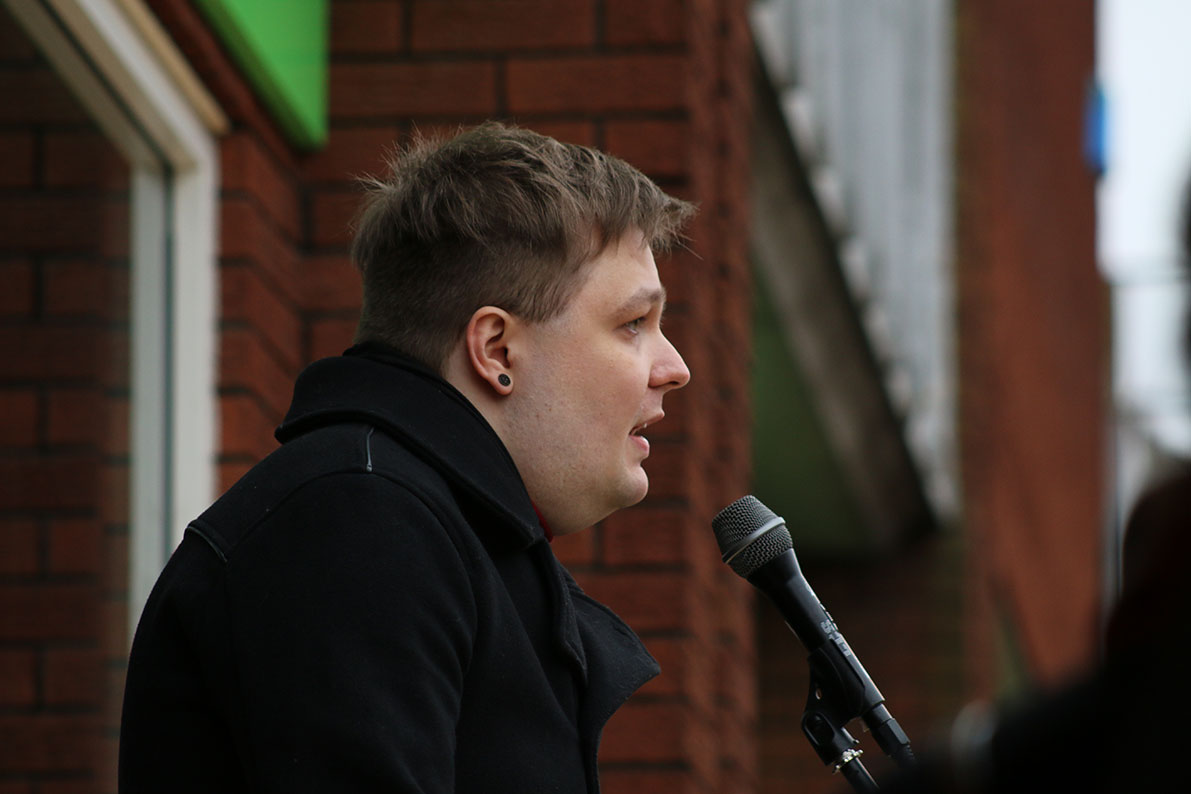 With more friends and figureheads waiting in the wings, a friendly reminder from Gerard to keep all speeches under two minutes launches proceedings gets a ripple of laughter from the crowd – mirroring the minister’s call for celebration and humour amongst the grief.

First to speak is Cllr Josh Jones (Lab, Stockland Green), who talks through his memories of meeting Jack during his first General Election campaign in 2010, to standing beside him as one of the city’s youngest campaign agents in the MP’s subsequent bids for the Erdington seat.

But it was the heartfelt memory of Jack and wife Harriet Harman cancelling their family holiday to be at Josh’s wedding that hammers home the closeness of their relationship, one evolving from professional to personal, and rubber stamps the sentiment of remembrance that would be reiterated throughout the afternoon. 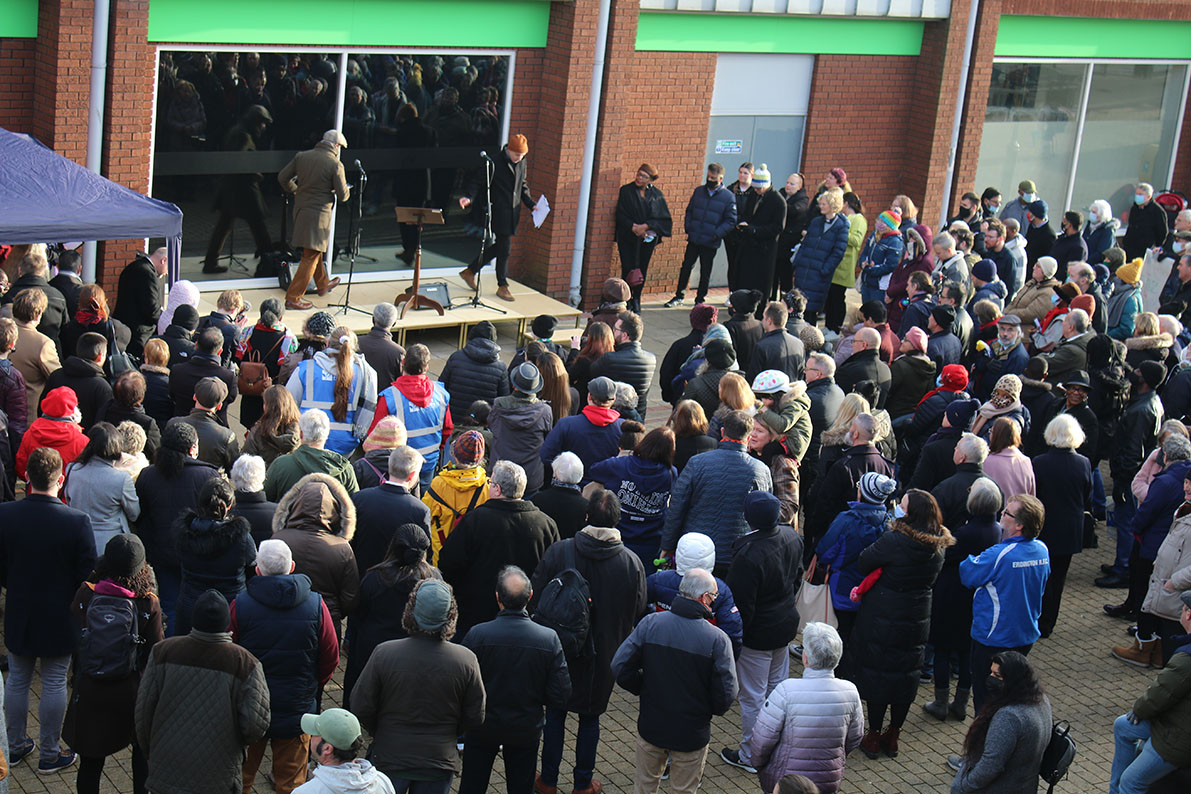 “It feels incredibly strange and weird to be thinking of Erdington without Jack… a wonderful MP, a wonderful friend, a wonderful comrade. I will miss him very, very dearly.”

Cllr Paulette Hamilton (Lab, Holyhead) follows Josh Jones, regaling her own memories of a man who “came with so many titles…” and “encouraged people to be a better version of themselves”. Before the stage is set for Cllr Robert Alden (Con, Erdington), arguably Jack Dromey’s most immediate political postcode rival.

Immediately paying tribute to the late Penny Holbrook, the Stockland Green councillor who was also found dead at home back in November last year, Cllr Alden goes on to honour Jack Dromey’s “formidable reputation” in trade unions and politics, a man “passionate for worker’s rights”.

Afzal Hussain and Linda Hines MBE, WLCA Chief Officer and Resident Director respectively, stand together next – representing one of the key constituency stakeholders, who worked closely with Jack Dromey for over a decade on projects ranging from social care to High Street regeneration. 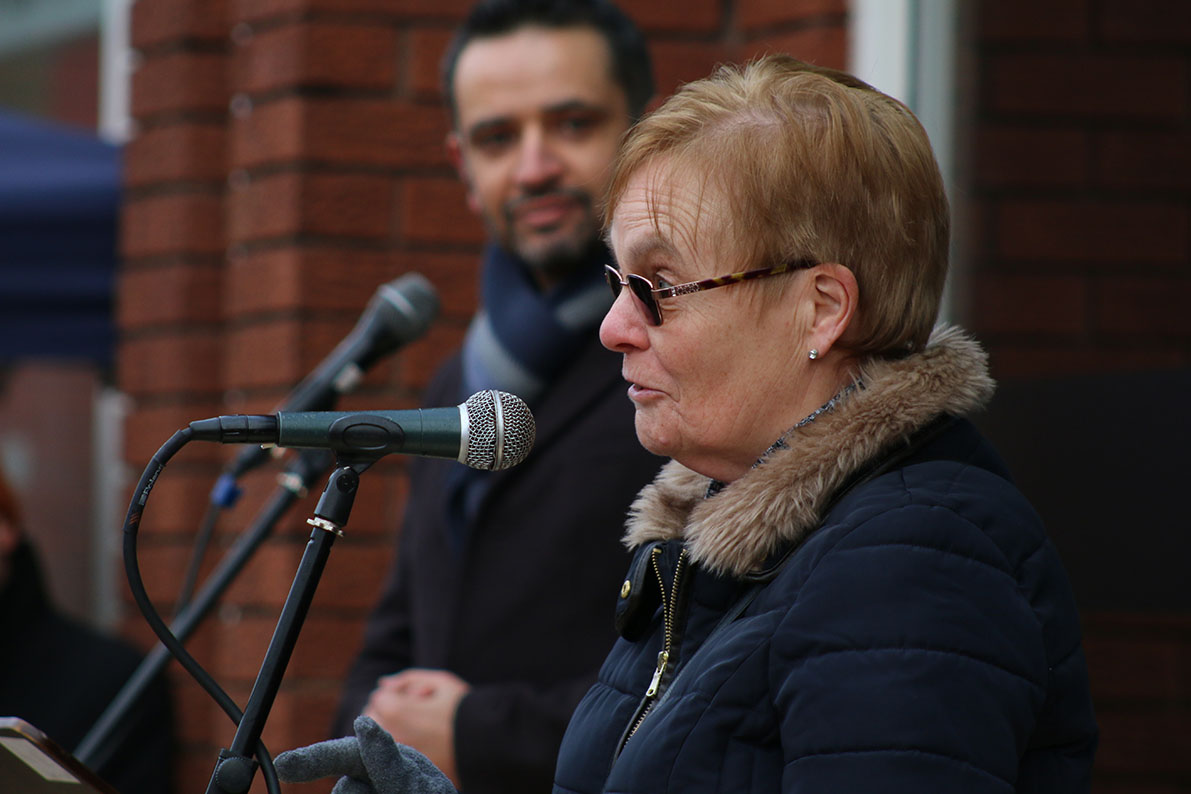 “Jack was a principled politician,” begins Afzal, “he had huge convictions and sense of justice and fairness,” before reminding the crowd of Jack’s pivotal work through the “the dark days” of the coronavirus crisis and his role on the Erdington Covid-19 Taskforce.

A quick joke about Jack’s love of a “a good photo”, and an anecdote from Linda about meeting Jack when she was a last minute stand in for Santa (there are pictures), round off a eulogy from two more people who will struggle to see Erdington in the same way again.

Stepping back into the political arena, Birmingham City Council Leader and Shard End representative, Cllr Ian Ward, is next to speak – mourning the loss of “a great friend, inspirational colleague, and a good man.” 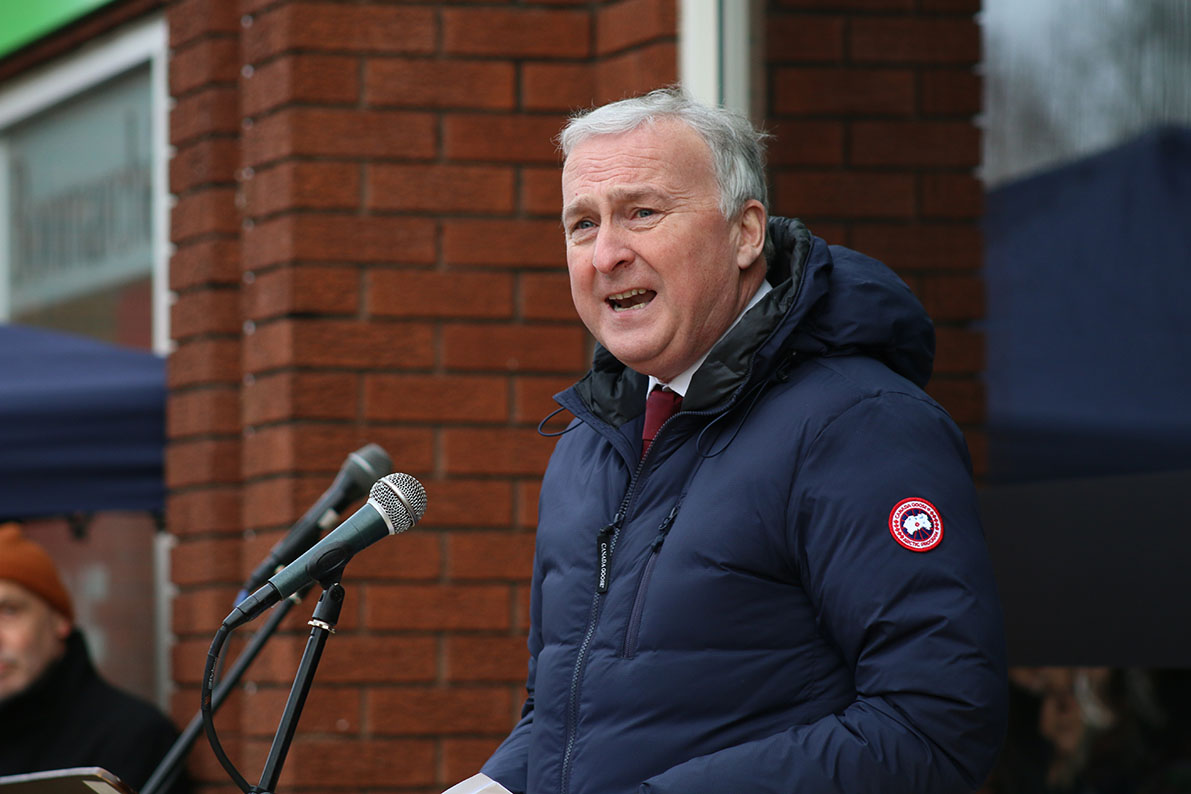 A close personal and professional ally, Cllr Ward continues to reiterate Jack Dromey’s ability to bring warring fractions together for the greater good – celebrating the late MP’s commitment “to give a voice to the unheard” and his “tireless enthusiasm and dogged determination”. Traits many in today’s crowd will both recognise and be grateful for.

But simplicity is often the clearest full stop, as Cllr Ward sums up his earnest goodbye to “ultimately a decent and principled man” by extending condolences to the grieving family he has left behind – hoping they know just “how much Jack was loved here in Birmingham.”

Jess Phillips MP for Yardley is next to address the crowd, having known Jack since working in his constituency office before becoming elected and whose own Yardley office has now stepped in to assist with “urgent” casework in Erdington.

A defiantly human face in the political mirror, Jess begins telling the second city crowd, “your stories, your lives, were always his very first and most pressing concern. 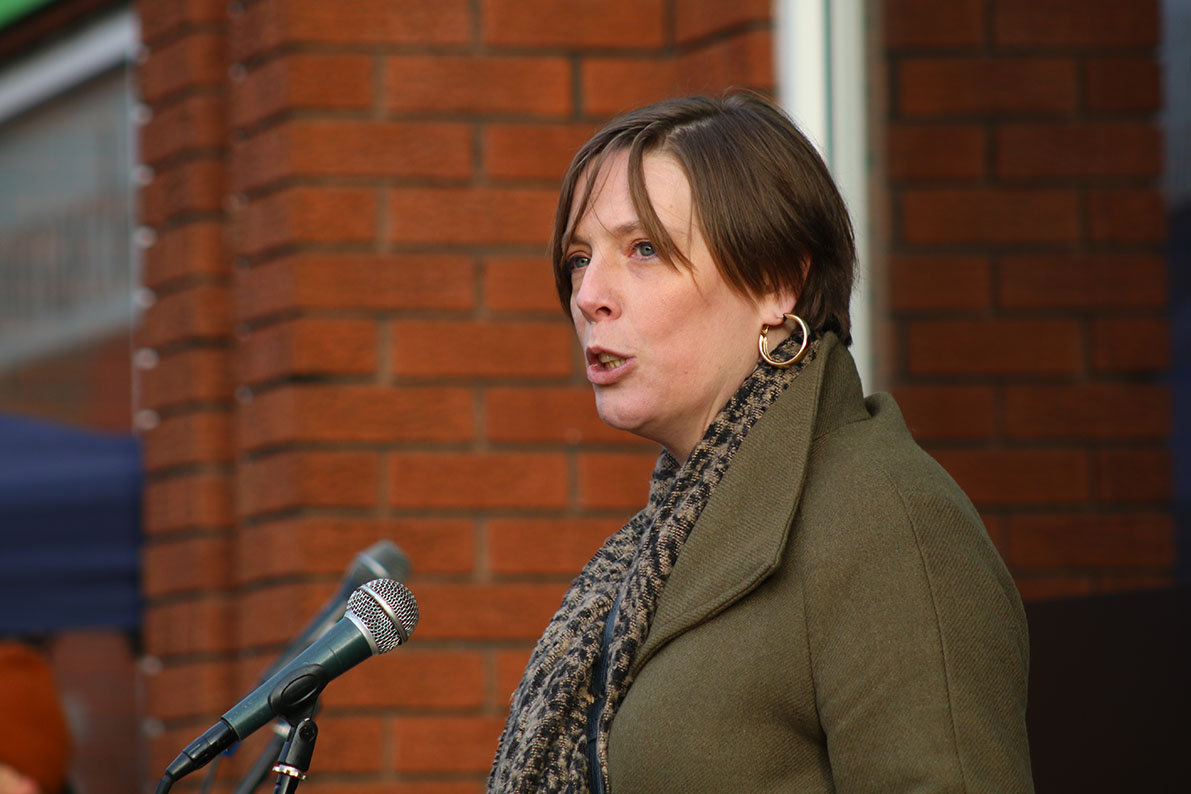 “Jack fell in love (with Birmingham), he chose us, and he saw what many outside of Birmingham don’t see – it may not be the prettiest but the people are magnificent. You won his heart.”

Reminding us of Jack Dromey’s devotion to his family, be it round a dinner table or in the halls of power, a memory of “the regulation weekly slide show of the pictures of Jack’s grandchildren” makes way for a live performance of a special jig written in Jack Dromey’s honour by the head of the Erdington Arts Forum, Jobe Baker Sullivan.

And as the music plays, paying homage to Jack Dromey’s Irish roots, the sun literally begins to shine.

A sharp reminder of Jack Dromey’s important role in the lives of his Erdington constituents comes as Jane Roche celebrates the MP’s support for the Covid-19 Bereaved Families for Justice campaign. Jane lost both her sister and father to coronavirus within a week of each other, with Jack picking up the charge and pushing for a public inquiry in the house. 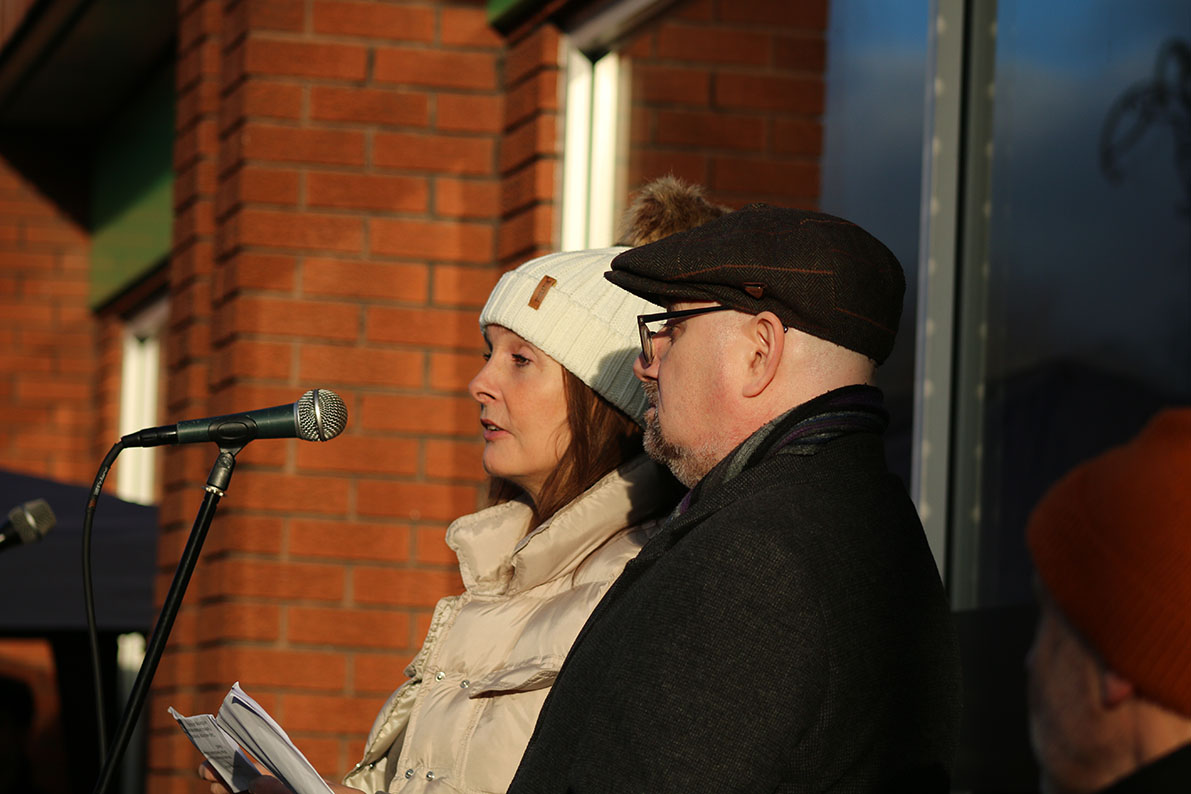 Ray Goodwin joins Jane on stage, both from the Castle Vale based Spitfire Support Services, and reiterates the impact of “the most remarkable man we have met; fearless, passionate, and caring – he fought for justice and fairness all his life.”

The day continues and the temperature drops, but the crowd standfast, as further messages of love and memories of laughter come flooding off stage. Representatives of local community groups, religious institutions, law enforcement, and local schools all offer their reasons for celebrating the life and legacy of Jack Dromey.

The crowd are invited to write messages of condolences for Jack Dromey’s family, hand written notes to be delivered by Active Arts and the Erdington Covid-19 Taskforce, before the last opportunity to speak goes to Liam Byrne – Member of Parliament for the neighbouring constituency of Hodge Hill.

Liam’s own father was at school with Jack Dromey, the MP remembers, and the actions and integrity of that generation have clearly left their mark on the man – as Hodge Hill’s voice in the house walks us down Jack’s “long march for justice”. 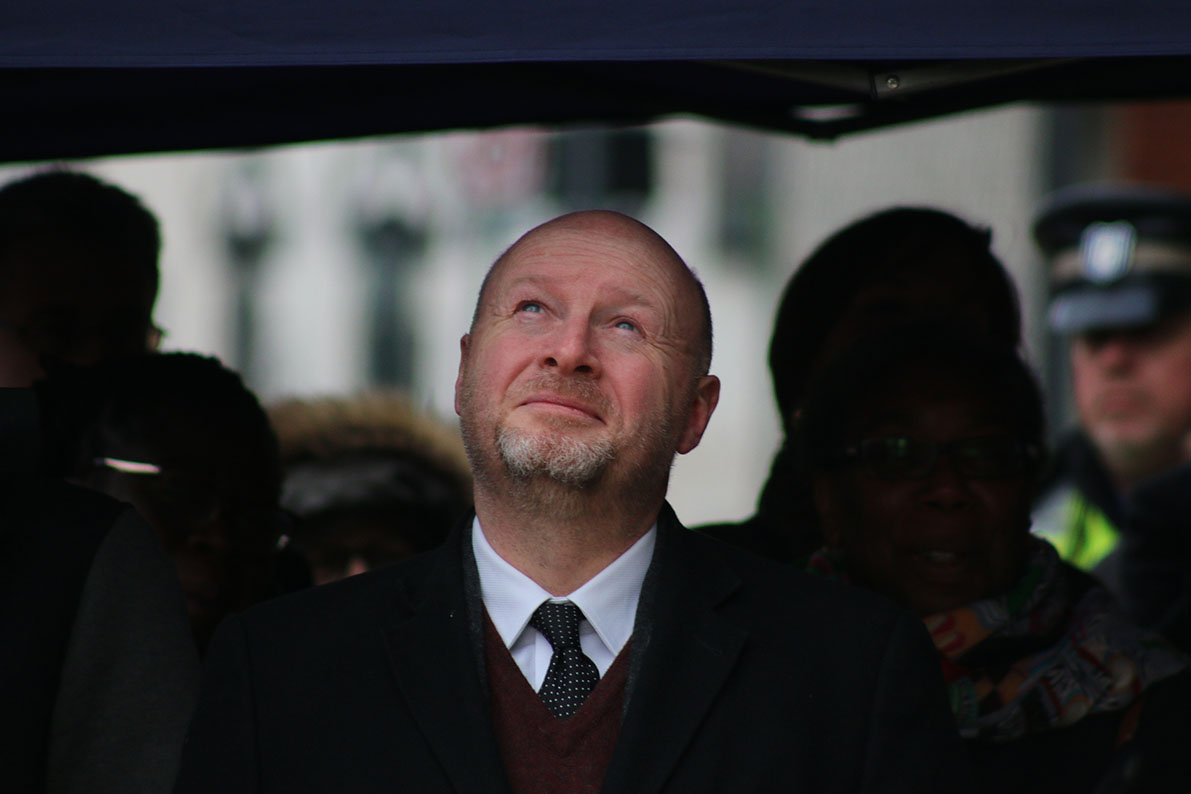 “And it’s at those points that you need someone to put an arm around you, to give you warm words, to tell you it’s going to be OK, to tell you you’re a superstar.

“Jack put the fuel in the tank all of us in the fight for justice. He was the best booster that has ever been invented… Britain’s second city has lost its greatest citizen.”