Erdington Local continues its investigation into the frightening world of HMOs (homes of multiple occupancy) shining a light on the cruel rules and regulations thousands of tenants are forced to live under.

Chief reporter Adam Smith talks directly to the tenants living in uncertainty and fear across Erdington and the UK, wading through the inhumane bureaucracy behind HMOs – in his next article for EXPLOITED. 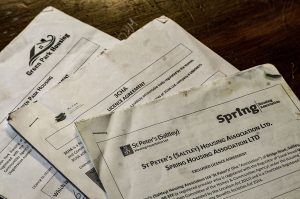 It took centuries for tenants to get legal rights so ruthless landlords could not evict them on a whim.

However, right now thousands of Erdington HMO tenants are living as if the 20th Century never happened, in fear of being made homeless at any time.

HMO companies force tenants to sign license agreements, which leave them at the mercy of a raft of rules – many of which are vague and subjective, but which if broken can lead to eviction.

All three agreements are remarkably similar in their authoritative tone and demands on the tenant; the multiplicity of rules needed to be adhered to might as well see Houses of Multiple Occupancy redefined to Humans Must Obey*.

Green Park Housing and 3CHA warn tenants they could be evicted in a ‘REASONABLE’ amount of time. Although ‘REASONABLE’ is spelled put in capital letters on the official documents, an actual unit of time is not mentioned.

A consistent feature with all the HMO licence agreements is the stress on the importance of tenants paying a weekly service charge. Despite housing benefit covering the rent, often in the region of £800 to £900 a month for one room, housing providers demand a further weekly fee – Spring Housing £12, 3CHA £15, and Green Park £13.

Which the tenant has to pay, meaning tenants on benefits have to stump up 20% of their monthly money. 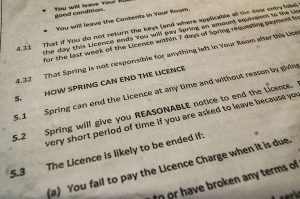 Unscrupulous landlords have realised the money spinning benefits of turning their house into an HMO, so now rooms are advertised for ‘£15’ per week and can only be rented to benefit claimants. Tenants sign up for ‘supported living’ in their licence and then Birmingham City Council will pay in the region of £900 a month for a room.

All the licence agreements are explicitly clear, if the weekly service charge is not paid then the tenant will be evicted.

What’s more, HMO tenants are forced to live under rules which means their house can never feel a home. Rules include: ‘no pictures can be hung on the walls.’ They cannot drink alcohol, smoke, or even swear in their own home.

3CHA‘s licence agreement says in bold black letters: ‘You cannot have anyone stay with You at the House overnight’ which bans adults from having the comfort of sleeping with another human being. 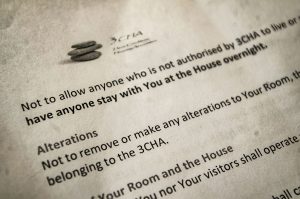 Spring Housing‘s agreement states: ‘You will not allow any visitors on site’ – meaning tenants in their properties cannot invite friends, family members, partners, or anyone in for a cup of tea or chat.

Even prisoners are allowed visitors, a right that is seemingly not extended to you if you live in an HMO.

A female HMO tenant, who did not want to be named for safety reasons, said: “I’ve lived in several HMOs and it always feels like they are trying to isolate me. I can’t even have my friends round for a laugh; I can’t decorate my room. The only time I hear from the support worker is when they demand the service charge.

“And the rules are vague and open to interpretation, if they come up with a scenario which they say I am in danger or a danger to others then I have three hours to vacate. I’m old enough to remember when tenants had rights, but HMOS are different, they are evil. HMO for me stands for Humans Must Obey.”

Shamir Hussain, who was evicted by Spring Housing during the COVID-19 lockdown, said: “I just signed what they wanted me to when I got the room, but Spring used the small print rules to evict me during the pandemic. 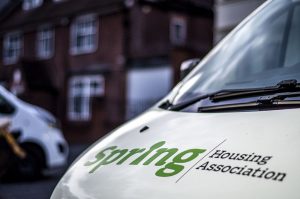 “They used the fact that the kitchen was messy to evict me because of some rule they said I was breaking.”

The lack of privacy is another feature of living in a HMO, staff can enter a room whenever they want. Erdington Local has obtained a recording of a ‘landlord’ and ‘support worker’ entering a house at 11.30pm – demanding residents names, despite having no identification and refusing to give their own names.

GPH‘s licence agreement explicitly says on the first page: ‘This licence does not confer exclusive possession. GPH and its staff have the absolute right to enter Your Room at any time without notice.’

And even more disorientating is the fact that tenants can return their rooms and find them altered, as Spring Housing states: ‘Spring may change Your Room from time to time without notice or Your agreement. This can be done for any reason.’

Housing charity Shelter gives advice to tenants and tells them what they should legally expect.

However, thanks to the introduction of the HMO into the housing market these basic rights that tenants should expect have been removed.

Which, sadly, is true – in the 20th Century tenants had more rights than the 21st Century. Because of HMOs.

*Humans Must Obey is copyrighted by Napier Productions – pertaining to the name of a forthcoming documentary about HMOs.

If you have been affected by HMOs or any of the issues mentioned int his article, we want to hear your side of the story – email Erdington Local on exploited@erdingtonlocal.com